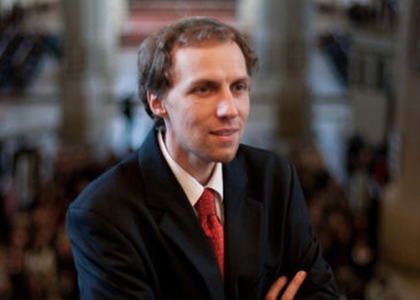 Steffen Schlandt will be the Radio Chamber Orchestra’s soloist

Wednesday, on November 7th, 2018, a new Radio Chamber Orchestra session will take place at Sala Radio. The repertoire consists of Bach's Concerto No. 1 in D minor, George Friederic Handel'sConcerto no. 13 in F major "The Cuckoo and the Nightingale" and Giacomo Puccini's "Messa di Gloria" under the baton of Cristian Ciucă. The soloists will be the tenor Nicolae Simonov, the baritone Cristian Ruja and the organist Steffen Schlandt, whom we have interviewed.

Thank you for accepting our invitation. Tell us more about the concert that will take place on Wednesday at Sala Radio, where you will be performing two Baroque concertos as a soloist.

It is an honour for me to collaborate once more with the Radio Chamber Orchestra, and perform two concertos that are very different from one another, even though they belong to the same period - the Handel and Bach baroque period. Their complexity differs, and so does the composers' approach: the arrangement for soloist and orchestra - which is Handel's case - or Bach's preference for the pipe organ as a virtuoso solo instrument. The organ in Bach's piece stands out, but it is in fact strongly connected to the other instruments and the composer. Therefore, the concertos are completely different.

And the repertoire is rounded by Puccini's Messa di Gloria. In what way do the three pieces complement each other?

The spiritual element is evident in Bach and Puccini because the first and the third parts from Bach's concerto are excerpts from cantatas. The first part is from a chromatic cantata - which delivers the message that only through offerings and suffering can people enter the Heavens - and thus the religious theme becomes a bridge between the two pieces by Bach and Puccini. Whereas Handel's The Cuckoo and the Nightingale can be considered less spiritual, tackling subjects such as nature and God's creations.

As this is not your first time performing on this stage, we would like to hear, from a personal point of view, your thoughts on Sala Radio's pipe organ.

Being an instrument that has been so strongly connected to the sacral space for over a millennium, it clearly reaches its full potential in the church. The pipe organ was used in great concert halls for the first time at the beginning of the nineteenth century. I had the honour to collaborate with Sala Radio and I realized that the hall acoustics here are perfect for pipe organs and chamber orchestras; the sound is clear and I trust that the instrument's tracker action - which is actually electronic - should have no delays when played by the soloist. Currently, there are three organs in our country that can be classified as the biggest in Romania: the biggest mechanical pipe organ is in Brasov, the biggest pneumatic one is in Sibiu and the biggest electronic one is in Bucharest. The latter also being the most modern one.

Have you ever collaborated with the Chamber Orchestra before? What expectations do you have?

As an organist, I really hope my rendition delivers the baroque palette; I want the orchestra to adapt and dedicate themselves to this baroque style so that we find the best version of this repertoire together. We are looking for that transparency that will make the audience understand this musical density as much as possible.