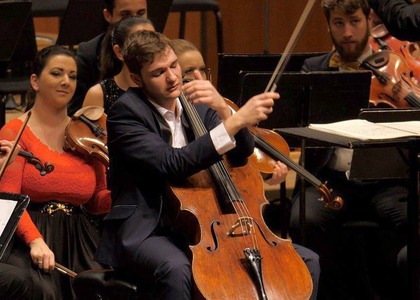 Cellist Andrei Ioniță sent us some impressions from his tour with the National Symphony Orchestra of Romania and conductor Cristian Măcelaru in the United States of America. The last concert in the series is taking place today, 16 January 2019, at State Theatre in New Jersey.

"Greetings from Detroit Airport. Our tour is coming to an end. We started with some very beautiful concerts in the state of Florida, and then we flew to the Northern part of the East Coast, to New York, where the orchestra played with the well-known trumpeter Wynton Marsalis. Next, we played near Detroit, at the Wharton Center for Arts. This time, we played Rococo, instead of Dvorak's Concerto, which had been scheduled for the other concerts. We were very, very glad to meet the Romanian community in the Chicago area in Michigan. We thank everyone for their support, both the people at home in Romania, and the Romanian diaspora here, in the States. There's a very friendly atmosphere. We travel a lot, but, nevertheless, we do our best during our concerts. So far, there has been a wonderful atmosphere. It has been a tremendous pleasure for me to take part in this tour, which is a unique one so far. We've already had quite a lot of concerts in the United States and being in the company of your countrymen brings you an extra feeling of warmth and makes you feel less like a foreigner."