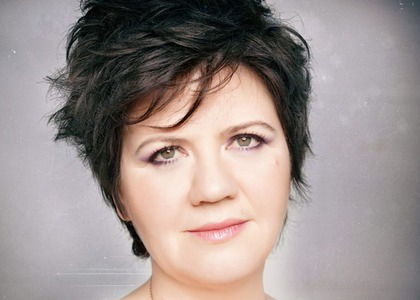 Interview with the Pianist Dana Ciocârlie

On the 13th of January 2019, you will open the year with Concerto No. 2 for Violin and Orchestra by René Koering, under the baton of Lawrence Foster. What can you tell us about this piece?

It is a very modern concerto, I could even say post-Boulezian, and it has a story behind it. I mean, the title is Ephraim Straglitter. Ephraim is actually one of Rene Koering's sons, and Straglitter means the parlour, the place where nuns or monks speak to the outside world, that little polished opening from which they cannot be seen, but they can speak. It is a kind of mysterious and secret and very spiritual place. That's exactly why there are two pianists in this concerto. One pianist is on stage, in front of the orchestra, but there is another one backstage. He is like an inner voice, so to say, responding to or in dialogue only with the concerto's solo piano using certain musical quotes, particularly from Schubert's sonatas.

What was the idea behind Voyage en Orient Express and how did it evolve over time?

The journey on the Orient Express takes several forms. The first one that comes to my mind is a solo piano recital that came to me as an idea, originating from my personal experience, because when I went to Paris for the first time, I actually took the Orient Express from Bucharest. Obviously, it did not resemble the train from Agatha Christie's novel, but it was the Orient Express with exactly the same itinerary. This piano recital embodies representative music from every country the train passes through: Romania, Hungary, Austria, Germany and France. I will perform it twice, on January 30th and February 3rd, at La Folle Journee of Nantes, the famous festival, which is dedicated to travel books this year. The second form is that of a stage show that incorporates both esoteric and popular music from these countries. It came to be when I met a brilliant violinist, a spiritual follower of Yehudi Menuhin, the French violinist living in California, Gilles Apap. When I say brilliant, I am referring to the fact that he is the disciple of Ivry Gitlis, a classical violinist who is able to improvise like a native in all styles of folk music: Turkish, Romanian, Bulgarian, Irish, country music, Indian and so on… He truly is extremely versatile. The idea was that with a traditional ensemble, that is, accordion, bass and double bass, we could broaden this journey, introducing not only music by famous composers such as Ravel, Franck, Enescu, Paul Constantinescu, Mozart, Brahms, but also the music of the peoples of these countries, which are stops along the way of Orient Express.

How do you prepare for the recital, which will take place at the Radio Hall on March 12th, 2019?

With a lot of work, but also with great love, because I haven't played a radio recital for at least 15 years, and I thought about putting representative pieces of my current repertoire in the program. Obviously, a lot of Schumann, because I did some recordings a year ago, but also music by Paul Constantinescu for example, whose three famous piano pieces I doubt are played often. In addition, I will play music by Cluj born composer Gyorgy Ligetti, music by Jakata, and Schubert's German Dances, which I will also play at La Folle Journee in Nantes.

You will also be on the jury of the Mihail Jora contest on March 8th and 9th. What can you tell us about this event?

I am very nervous because this will be my first time as a member of a jury in my own country, a serious jury for a great contest and I am deeply honoured to be part of this. I hope that all the jury members will only encounter pleasant surprises from the candidates.

What is next for you? What else do you have planned for this year?

I will be in Romania frequently this year because of the Romania-France Season, which is thanks to Romania's presidency at the European Council. I will have many collaborations in Romania with the French conductor, Michael Cousteau. We will play a Franco-Romanian program, in Timisoara in May, in Iasi in late April, just after Easter, in Bacau, and maybe in other places. I will be playing two concertos each time, a concerto by Paul Constantinescu and another concerto by a young French composer. When I say young, I mean he's very young, 34-year-old Jean Frederic Neuburger. So in the same concert, we'll have two concertos, plus obviously symphonic works by Enescu, Ravel, and Diana Rotaru. I'm also preparing a Mozart program to record soon. I still do not have exact dates, but it's in the making. I also have many, many concerts scheduled for next summer.