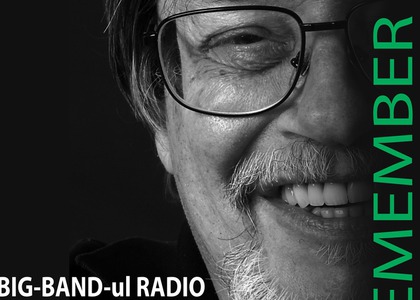 The Radio Big Band, led by Ionel Tudor, will perform a new concert called "Remember Peter Herbolzheimer". Herbolzheimer was a big European jazz enthusiast, with Romanian roots on his mother's side, who led the most highly acclaimed band in the continent - "Rhythm Combination and Brass" - in the 70's- 80's, as well as the German National Youth Orchestra. Peter Herbolzheimer - a great orchestrator and teacher, remains to this day one of the most charismatic conductors of the great jazz orchestras. He returned to Romania in the early 2000's for a series of concerts, notably with the Radio Big Band. The band's current conductor, Ionel Tudor, gave us a short interview about this event - the "Remember Peter Herbolzheimer" concert on January 31st at 19:00 at Sala Radio.

You are preparing a very special concert in the memory of a great artist. Why should we remember Peter Herbolzheimer?

We will always remember Peter fondly and we will always be sad that he is no longer with us. To us, he has always been and always will be a great musician, a perfect orchestrator, an amazing man - because I had the real pleasure of meeting him several times and watching him conduct and explain musical scores. I learned many things from Peter.

For this upcoming concert on January 31st, we thought to take his arrangements and musical themes and make a sort of a "remember Peter". I discussed this with Florian Lungu and we hope that this concert will be exceptional, and we wanted to make a live recording of it. We have great instrumentalists.

Are there any instrumentalists left in the Radio Big Band that played in the 2000's, who had gotten to know Peter Herbolzheimer when he came to conduct it?

Yes, of course there are.

What do they remember about him?

When I proposed this project, everybody was thrilled and very willing to help organise this event. This time we have improvising musicians such as Sebastian Burneci, Paolo Profeti, Ioniță Marin, Diana Suciu...

Yes. Laurențiu Zmău on the drums, George Natsis from our generation on the piano. And Liviu Negru, a very good guitar player. We hope that the concert on Thursday will be as good as we expect it to be. We're very excited to play for the audience at Sala Radio and for the audience at home listening on the radio channels.

Will you stick to Peter Herbolzheimer's original arrangements or you will play with them in the improvisational spirit of jazz?

The score is the score, and the improvisation is up to each instrumentalist.

You let them improvise.

Of course. Each came with their own personality, musicality and completes the musical score.

Any last words, an invitation for the jazz loving audience - to come to Sala Radio...

...for an exceptional concert.