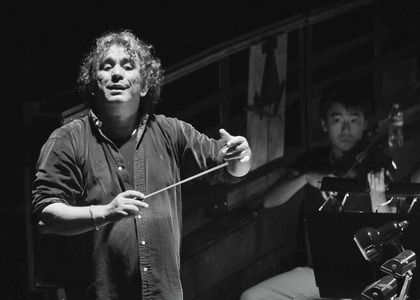 Conductor Nicolae Moldoveanu will lead the National Radio Orchestra on March 8, in a concert marking the 150th anniversary of the death of Hector Berlioz (who died on the 8th of March 1869) by performing his famous Symphonie fantastique, op.14, along with two other famous French and Romanian compositions. We interviewed the musician, who left Romania in 1982, after his rehearsal.

Are there some special memories that you associate with this group?

There are memories, both artistic and emotional, which bring me joy each time I come back to this amazing ensemble that is the National Radio Orchestra. Firstly, this ensemble is the orchestra that represents Romania nationwide, and it is, actually, the only radio symphonic orchestra in the country. Its responsibility towards the musical scene - both the audience in Sala Radio in Bucharest and people tuning in on the radio - is greater. Therefore, the standard for this orchestra is the highest in Romania right now.

Why did you include Enescu in tonight's programme?

It's very simple. Tonight's theme is the relationship between Romania and France which has always been, ever since the 19th century, very prominent; these two cultures are linked politically, architecturally, culturally and musically, of course. Tonight we will perform the most famous Romantic French piece, Berlioz's Symphonie fantastique, Saint-Saens's Cello Concerto No.1 together with Răzvan Suma, and Enescu's Rhapsody No.1, which was written in Paris. Actually, Enescu was a Parisian and he dedicated all his compositions, which have a Romanian theme, to his colleagues who were all French.

Why the first of the rhapsodies?

If I were to choose, I would have performed both of them. The first rhapsody has a livelier sound. The second one has something epic, it's quieter. Both are well known, but given its livelier characteristic, it warms up the audience at the beginning of the concert, if I may say so, being a beautiful introduction and preparing them for the next piece - Saint-Saens's concerto.

How was Enescu's rhapsody received in other countries, when you included it in the concert that you conducted?

This is a very good question. I was just thinking that the last time I performed this rhapsody by Enescu it was with the Malaysian Philharmonic Orchestra in Kuala Lumpur, and I must tell you that I was a bit worried about this choice. The choice was encouraged by the orchestra. Kuala Lumpur is the capital city of Malaysia, and when you say Malaysia you think it's some local orchestra, but that's not the case. The orchestra, funded by the Petronas company in Malaysia, is actually an international orchestra; there are no Malaysians in the orchestra, I think there are 28 different nationalities. And when you think about performing a piece with strong Romanian characteristics, you take into consideration how the orchestra would play it and how the public would receive it. I must tell you the reaction was surprisingly positive. Thanks to the multiculturalism in the orchestra; there were European and American instrumentalists, they knew the piece and performed it with ease, and their technique was amazing. The audience was extremely enthusiastic and reacted instinctively to this piece. I remember how the performance of Enescu's Rhapsody was received with sincere applause. The audience didn't know the piece; they were Malaysian, coming from a Muslim culture, they are not used to classical music in the way we understand it in Europe, and especially to music with heavy folklore influences, with a classical arrangement for a symphonic orchestra. So it was hard to imagine how the audience would receive it, but the audience received it so warmly that I, as the conductor, was delighted.

I know you have your roots as an organ player. Does it help you in any way?

It is very simple to answer this question, as the entirety of the French school for composers was based on this instrument, the organ. Actually, all of the French composers were organists. This is, in fact, typically French: Franck, Sains-Saens and so on. Berlioz, however, was not an organist; he played string instruments. He probably played both the organ and the harmonium, but in Paris, in the 19th century, being an organist was more prestigious than being a pianist. The organ is a very important instrument in the history of classical music. Organists have the advantage of being able to read more staves than pianists, their sense of harmony is more developed, and they have a unique sense of counterpoint and nuances, because the organ has a wider range. In fact, composers from the 19th century tried to imitate the sound and timber of the organ in an orchestra and the other way around, creating parallels between them. So, being an organist makes it much easier to understand French music. Moreover, I live one hour away from France, in Switzerland, very close to the French border, and I go to France once or twice a month. I am always in contact (physically and spiritually, of course) with the French culture.

Is Berlioz's Symphonie fantastique significant to your development as a conductor?

Oh, it means a lot, not only musically, but also as life experience. I have a lot of stories with this symphony. Other than the fact that I performed this symphony many times, I had the great opportunity to see Sir Colin Davis, who was one of my teachers, he was a conductor to whom Berlioz was just as significant. I think he knew all of Berlioz's compositions and he conducted concerts worldwide, including with the National Orchestra of France. I had the opportunity to be present during his rehearsals with the National Orchestra of France and at the concert, of course, and learn from the very best. I find this extremely important: to perform the piece not merely by reading the score, but by getting to know the circumstances distinctive to the nation of the composer comes and to know more about the ideology and culture of that country, in this case - France.