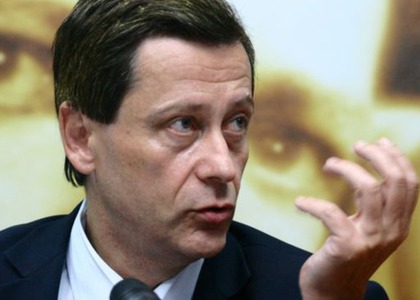 Sunday the 19th of May will mark the start of the 2019 edition of the "International Week of New Music" Festival. This year's program brings contemporary French music, alongside young Romanian musicians and composers, into the spotlight.

This series of events is organized by the Ministry of Culture and National Identity, The Union of Romanian Composers and Musicologists, The Romanian Radio Society and The National Music University of Bucharest, accompanied by the French Institute and the Ministry of Foreign Affairs. I have discussed the SIMN 2019 program with the UCMR president, composer Adrian Iorgulescu.

This year's edition of the SIMN Festival takes place in close connection with and is dedicated to the Romania-France season. How important is the preservation of cultural exchanges such as this?

It's in the tradition of the Festival to entwine our contemporary music with that of other European, North-American, and Asian composers, among others. The invitation that we have issued, which has been accepted, gives us the opportunity to get directly in touch with the composers; besides, musicologists are also invited - there is also a session about Romanian and French music, focusing on the stylistic, technical intersections between our composers and the French composers. I had a good collaboration with the Minister of Foreign Affairs and with the French Cultural Institute. These exchanges are made as an extension of the centenary we had celebrated in December, last year, the special, historic and cultural relations between Romania and France being brought to light.

On the 24th of May, at the Radio Hall, we will listen, to a love performance of the cantata that you have named Time's Cross. How would you describe this piece?

This piece is dedicated to the Union's Centenary; hence, the name "Time's Cross". The piece is composed for a mixed choir and orchestra, with lyrics of my own, and through it, I'm trying to give a modern composer's perspective on the historical event. I am curious myself how it will turn out. I hope the collaboration with the National Radio Orchestra and the Academic Radio Choir will live up to my expectations.

Which events would you recommend to the SIMN public?

The opening concert featuring Romanian compositions that will take place at the Romanian Athenaeum. I'm talking about the Concerto Orchestra from Bucharest's Music University, led by Bogdan Vodă. There are many chamber music concerts. Apart from that, I'd like to mention the Archaeus band, The Contraste band and other known groups, such as devotioModerna, but also ensembles that will be in Bucharest for the first time, such as the Atem ensemble. The Gaudeamus quartet from Brașov is also worth mentioning.

At the Radio Hall, a highly anticipated moment on this edition's program is the smartphone choir brought to SIMN by Bernard Cavanna.

It's a hand reaching out to technology, since the thing Cavanna does is taking different sounds made on telephones, smartphones or any other devices, which he then uses and orchestrates. It is, if we may say so, a technological insertion in the world of contemporary music. The results, as usual, are highly unexpected, even to the composer. I shall conclude this list with the concert of the philharmonic, where among other things, numerous other Romanian pieces of work will be performed, from which I'd point out Tiberiu Olah's Third Symphony.