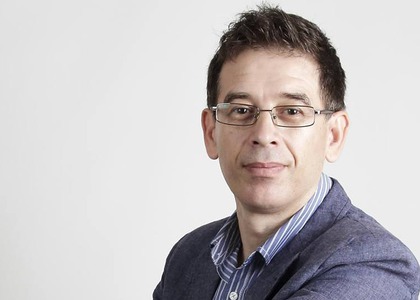 Interview with Cristian Marica, the coordinator of the Jazz Season from the Act Theater

What is the structure of Season 2019-2020? What surprises are there in store for jazz lovers?

I remember that the first event of the jazz season consisted of 6 concerts, which took place at the Act Theater 10 years ago. We did it so that we could see if people really wanted to come to the Act Theater to listen to jazz. It has been ten seasons since the first one, and here we are. 90% of the seconcerts are sold-out. The things we come with are not necessarily accessible to the public. We are merely trying to highlight the pedagogical act. We are trying to change people's view for a bit, for them not to think that jazz only means Luis Armstrong or some other names from the area of universal jazz, but for the audience to understand that there is good quality jazz in Romania, as well, and that there is jazz abroad, too. This is the 10th edition. We are opening today. From what I have understood, all tickets are sold out, and we are happy to see this, and I want to thank the audience this way because the season is still going strong, precisely because the public comes to the Act Theater. We also have a compact disc. A random history, as I like to call it, about what happens almost every month at the Act Theater. It was released two years ago. The Casa Radio publishing house has released a new edition with this album, which, of course, we will make available for the public in the foyer of the Act Theater. After the concert, there will also be an autograph session. The essential act of the season is still Years after Petrucciani because its three members: Vlad Popescu (playing drums), Adrian Flautistu (playing basse) and George Natsis (playing piano) were somehow marked by Michel Petrucciani, not necessary in their career, but in the construction of this season. This trio is the unique element of the season, because nowadays in Bucharest, there is no jazz season with a fixed goal when it comes to distribution. These three have audience for every concert, and depending on the distribution and what line-up they decide to follow, they choose the theme of the concert. They play international jazz and Romanian jazz, and they also have guests: Paolo Profeti, who plays the saxophone, and Sebastian Burneci, who plays the trumpet. It is basically a pentagon in this area of distribution, which I would divide into two forms of trio. We can say that it is the trio of the Radio, formed of Sebastian Burneci, Paolo Profeti, George Natsis, who is the best part of the permanent season, which we also mentioned, and the fifer Natsis Popescu.