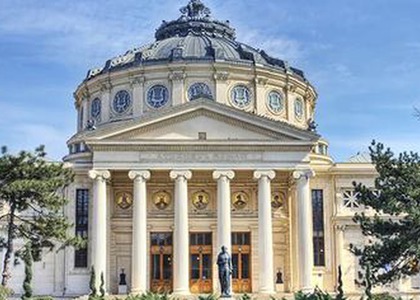 For twelve years, every Tuesday Evening Season has been offering the chance to meet Romanian musicians who study or leave abroad. Our goal is not only to make them famous in Romania, but also to reinvigorate the audience's will to listen to the wonderful rendition of chamber music masterpieces.

Each guest of the Tuesday Evening Season justifies his presence by national or international acclaim. But it wasn't always that way. Marin Cazacu and I decided to give birth to this project twelve years ago, inviting young people, who had earned their international renown - a few of them by then - but especially inviting young promising men. I'm happy to tell you that the first concert of the first edition in Autumn was performed by a trio, whose cellist was Andrei Ioniță. A few months later, in the same first Tuesday Evening Season, Andrei Ioniță gave a full recital. Cristina Goicea was among first musicians who gave a concert here. I believe that we have been lucky. Of course, there are a lot more names, but I reckon that at this moment in time, the above-mentioned are the most brilliant. Nevertheless, four generations have changed since them. More and more young instrumentalists study abroad, and more and more of them remain there to make their career. Those young men are the guests we pick for Tuesday Evening Season.

On the 8th of October, Alexandru Axenti from Chișinău comes with a violin recital, in collaboration with Sempre Concerto Association's - Cornelia Bronzetti, in the special series of The Winner of International Competitions. Another winner we can present you in October is Dragoș Marian Rușanu. Coming next, a guitar recital by Filip Zombor, in collaboration with Balassi Institute (The Hungarian Institute of Culture in Bucharest). And on the last Tuesday of October will be given a recital by the USA trio: Elie Bar (clarinet), Elias Goldstein (viola), and Angela Drăghicescu (piano).