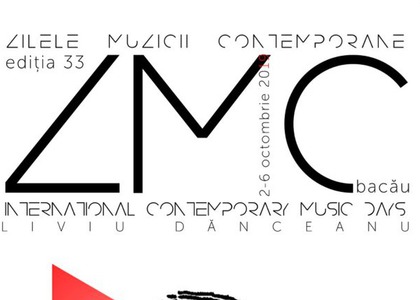 The Contemporary Music Days have a history of 33 years in Bacau, taking place in October, a month that is linked to the composer and festival mentor Liviu Danceanu's tragic destiny. He founded the Archaeus Ensemble in October 1985 and departed this life in October 2017.

Maestro Pavel Ionescu, could you tell us howLiviuDanceanu's music will be performed this edition?

First and foremost, LiviuDanceanu's music is strongly connected to theArchaeus Ensemblewhich has been performing during the Festival the last 25 years, playing compositions from every Liviu Danceanu repertoire. They played jazz, rock and symphonic rock.

This year, on 1st of October, the Festival was opened by the Archaeus Ensemble and we had the opportunity to witness another side of the composer's personality, namely the one where he promotes his art through visual arts. The evening was a memorable one, with RaduIgaszag's animations on Liviu Danceanu's music and presented by Loredana Baltazar.

There is a side of LiviuDanceanu that we are not so familiar with; in those animation movies he satirizes various social, political circumstances or morals. How did the audience receive the message?

Our audience in Bacau is used to what contemporary music has to offer and I could also mention that it's also used to what LiviuDanceanu's music and message. As a matter of fact, they had played something new at every previous Festival edition which proves how polyvalent Liviu Danceanu's art can be. He is a composer of unexceptionable mastery when it comes to showing the audience different aspects of life where most of the times he ironizes certain mischiefs. I recall one of his pieces that I saw five years ago at the George Apostu Center; it was a satire about the times we live in.

I've questioned you about Liviu Danceanu's personality because I've seen that the Festival's titular slightly changed and I would like to mention this to our listeners.

We cannot separate this festival from the personality of the one who was not only the founder of this festival (along with the Trio Syrinx and conductor OvidiuBalan), but he was also the one who had planned and guided the Festival's evolution throughout those 33 years of existence. LiviuDanceanu is actually bridging the past and the future and that is why this festival, which was the first of its kind, must be a tribute to the late composer. This is why it is called "Contemporary Music Days - LiviuDanceanu ."

I've noticed that the chamber and symphonic concerts alternate. In the second day of the Festival there was a cello and piano duo in Sibiu: the Florescu-Fernandez Duo with a high-spirited repertoire, Enescu-Hindemith-Schnittke. What other chamber surprises should we expect?

Every Festival edition we had alternated the chamber music evenings and the orchestra. The "MihailJora" Philharmonic Orchestra is a reference point for this event and in almost every edition the maestroOvidiuBalan conducted the performances therefore it is self-explanatory that during those 33 years he had conducted hundreds and hundreds of opuses. Of course, we are also focusing on the diversity that those recitals have to offer, be them instrumental artists from all over the country, or foreign or artists proposed by our institution. Almost every time during the Festival, there is an evening when all the "MihailJora" Philharmonic chamber ensembles are presented: The Fagotissimo Quartet, The Capriccio Duo, The Avangarde Quartet, The Classic Tuba Quintet "Ars Cantus". All of them are very important chamber music ensembles that altogether influence the professional growth of the whole group.

You yourself have also performed with the Mihail Jora Philarmonic chamber ensembles. Tell us more about that.

I played in two of them. Unfortunately one of them ceased performing and this is a saddening event. One of the founding members who was also a part of the Syrinx Trio, namely the flutist Dorel Baicu, departed this life last year which meant that the trio ended their activity as a musical group. Meanwhile I have been focusing on my musical specialization, namely playing the bassoon. Along with my colleagues George Hariton, who is first bassoon player in the Moldova Philharmonics Orchestra in Iasi, Mihai Timofti and Mihai Badiu who is from the Bacau Philharmonic, we had built in the last 20 years The Fagotissimo Quartet. Together we had performed hundreds of concerts in Romania but in other couple of European countries as well. In this Festival edition, together with the other chamber ensembles of the Mihail Jora Philarmonic and for the love we share for chamber music, for contemporary music and in loving memory of LiviuDanceanu, we had reunited once more. The Classic Tuba Quintet "Ars Cantus" did the same thing and they performed during the fourth day of the Festival once of the most important pieces written by LiviuDanceanu, "Trochos".

The "Grandissimo" orchestra is a seminary for young people. There are pupils from Bacau's George Apostu Art College, which over the last few years has provided (of course, after an academic training), important attributes in the Philharmonic Orchestra."Grandissimo" is a project that wishes to involve neighboring art schools such as Victor Brauner College in Piatra Neamt, SergiuCelibidache Music School in Roman and of course, George Apostu Art College in Bacau, all of them under the aegis of Mihail Jora Philarmonics and with help from Universe Z, led by Tiberiu Dospinescu, which is an universe where the young can share their love for music in an organized, pleasant place that tries to assure a better future.

Teaching another orchestra besides the MihailJora Philharmonic, what a great idea!

And not only did this had great success, but the students have already had many workshops and they still have other ongoing ones. They go to music training camps such as the one in July in TargulNeamt, the one in Bacau where they spent 10 days intensively studying under young conductor Andreas Mihaita's guidance. Later on they performed the new recitals in front of an audience, first at Sala Teatrului in TargulNeamt and then in Bacau, at the Philharmonics hall. They had been invited to the important piano festival held in Piatra Neamt, organized by pianist Daniel Ciobanu and affiliated with the "George Enescu" International Festival. The students also performed at our Festival along with the "MihailJora" Chamber Ensembles and on 13thof November they will be at the Esthetic Symposium organized by the George Apostu Cultural Center. We try to provide them continuous training but at the same time the opportunity to play on different scenes and I have another project that I am planning, namely to organize a summer camp in Italy next year.

One of your other special guests is a prestigious Romanian ensemble, the "Contraste" Trio from Timisoara. What does this imply?

The "Contraste" Trio is an ensemble that is very dear to me, an ensemble that we are always keeping in touch with. They had started out almost the same time as the Syrinx Trio. We performed at the first edition of Contemporary Music Days, while they performed the following edition. At first they had other members but now it's been years since the Contraste Trio is made out of the same exceptional musicians such as the flutist IonutStefanescu, the percussionist Doru Roman and pianist SorinPetrescu. They are all, and I am convinced of this, the effervescent element in the Romanian musical scene, especially in Timisoara. They are the most active contributors to the Intrada Festival. Of course, they perform on every stage, not only in Romania but also worldwide. In Germany they have an interesting collaboration with composer VioletaDinescu, the one who brought musical creativity in the context of silent movies. Last year we listened and watched at the same time, her work "Tabu", and this year comes with a new challenge for VioletaDinescu, namely with "Nosferatu, premiered on 5th of October. The "Contraste" musicians managed to create the soundtrack of this movie by using only three instruments.

And the day of 6th of October, which is the closing day of the "Contemporary Music Days - LiviuDanceanu", was also a tribute to a different way of creating music, through electronic sounds and many other ways. I've heard there is another acoustic instrument that is rather new.

Indeed, it is a novelty but it suits what Liviu Danceanu had inspired throughout the Festival's editions. It is not the first time when multimedia instruments decide the artistic course of the performance. This time, Fernando Mihalache's accordion fusions with Calatin Cretu's live-video processing.