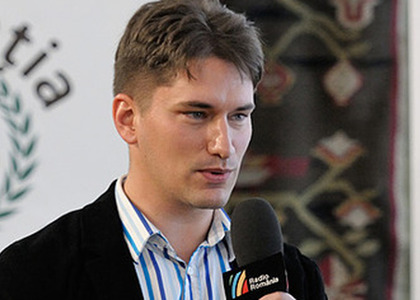 AlexandruNastasiu gave us more details about his work, "The Seasons" Concert for vibraphone, marimba, and orchestra, as well as about the CD with the same title, which will be released during the pause of the concert held at Sala Radio.

Tomorrow, on the 25th of October, you will be on the stage of Sala Radio, as the soloist of one of your creations, the concert for vibraphone, marimba, and orchestra, called "The Seasons". How would you describe this work from the perspective of the placement into the musical ensemble, which contains two other creations with the same title, written by Antonio Vivaldi and Astor Piazzolla?

Taking the title and the composers' names into account, it may seem a daring step. With the help of the musical language, I have intended to recreate the seasons just like they appeared at the bottom of the Retezat Mountains, which was like a corner of Heaven for me. My intention is to share with the audience the seasons, from this amazing place, via music. And how better way to do this, if not through the incredible world of percussion instruments? Let me give you an example: the wind machine, which has the aim of shaping the image of blizzard, or the rainstick, which has the aim of suggesting rain. Likewise, each season is recreated through these ways of expressing phenomena, as well as through using all orchestra sections. This means that I have divided the orchestra into string instruments at certain moments of accompaniment, blowing instruments and brass instruments.

What can you tell us about the collaboration with the conductor of the Romanian Radio National Orchestra, Pedro Carneiro?

Pedro Carneiro is a complex musician, having a career as a percussionist in the past, as well. I've had the occasion of meeting him during the rehearsals and I can tell you that, for me, it's an honor to share the stage which such a musician, and I'm sure that we'll offer the audience a great concert, having Pedro Carneiro at the conductor's desk.

The CD "The Seasons" will be released tomorrow. What other works can be found on this CD besides the above-mentioned concert?

First of all, I have been honored by the proposal of our colleagues from the Radio Publishing House of releasing this CD, and I want to thank them again for this opportunity. Besides "The Seasons", there are another five solo creations, four of them being for vibraphone - "Springvibes" and the other one for choral marimba- "Nostalgy". "Springvibes" is a musical piece, which I created especially for the festival with the same name from Germany, where I was invited to give a masterclass and a recital. Moreover, some of my old songs, mainly "The Dream" and "Never Ending Story" can also be found on this CD. And, of course, "The Seasons", the pièce de résistance of this disk, which you will listen to with pleasure.