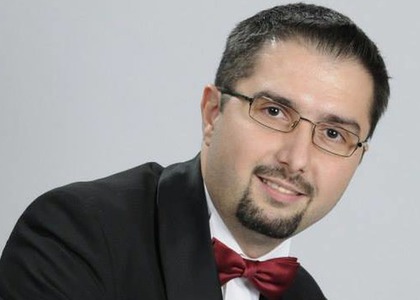 Tuesday, on the 31st of October, starting with 7PM, the stage of Sala Radio will be taken by the Academic Radio Choir. Under the baton of Ciprian Țuțu, the ensemble will interpret famous choruses from the works of Giuseppe Verdi, Giacomo Puccini, Richard Wagner, Gaetano Donizetti, and Wolfgang Amadeus Mozart.

Famous opera choruses - is what you're offering to the public at Sala Radio, tomorrow evening. Why did you choose such a programme?

Personally, I think that it is my duty. That's how I took the project. Four years ago, I came to Bucharest from the rostrum of Brasov Opera Choir, where I had conducted for four seasons. Unfortunately, the programme of weekly shows there, were of such a nature that I didn't manage to turn into reality the project I had in mind for a long time. But the time has come to implement such a project in Bucharest, a two-part concert, which includes the most famous titles or opera choruses, particularly, those by Verdi. You'll find several compositions by Verdi, but we also bring the works of Webber, Wagner, Bizet, Borodin, or even Gershwin.

How do you see the collective character - the choir from the opera performances?

Of course, the choir is always taken as a collective character, the one that sets the tone, or the one which is misidentified with the masses, with the substantial character from various operas, but, at least, from my point of view, on Tuesday night we'dlike to present the programme in such a manner, that the subtlety and musical expression prevail over vocal quantity or vocal massiveness.

Let me return to the tomorrow's night concert, in which the soloists will be the members of the Academic Radio Choir themselves. Who are they, and why do you think their evolution in such postures/positions is important?

It is, indeed. The whole performance is planned solely by the Academic Radio Choir, and I would mention here not just the eight chosen soloists, a pair of them for each score. I have engaged in this performance the organist Simona Săndulescu, also, the pianist and arranger Dan Stoenescu, the one who had arranged the piano reduction for two pianos for the last three acts of the concert, and naturally, I have introduced several percussion instruments to magnify the thrill and the particular chromatics. The evolution on these instruments is provided by the same members of the Radio Choir. From the lineup soloists, chosen among the members of the Academic Radio Choir, I've nominated Olga Caia -soprano, Elena Dincă - soprano, Claudia Caia - mezzo, Emanuela Sălăjan - mezzo, Marius Olteanu and Mihnea Stănescu - tenors, Cristian Ruja - baritone, and Ștefan Voicu - bass.

What does the future programme of the Academic Radio Choir look like? Which are the projects you're offering to the Radio Romania audience?

After a mostly intense month during the Enescu Festival, where we had four performances, we dedicated October to the preparations for this opera choruses concert, but we expect straight away, starting with November, several choral symphony works, like Messa di Gloria by Rossini, The Nocturnes by Debussy, and Requiem by Verdi. And last but not least, I'd like to mention a special concert we are preparing, a unique programme for the concert of carols, which will take place on the 17th of December.