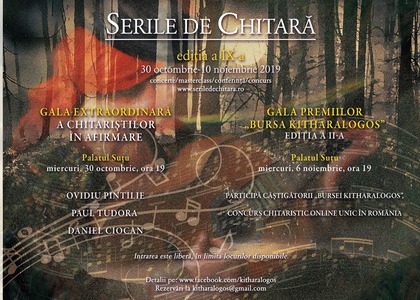 An Interviewwithguitarist Costin Soare about the “Guitar Nights” Festival

The IXth edition of the "Guitar Nights" International Festival will take place between October 30th and November 10th 2019, a project co-founded by the National Cultural Fund Administration. The Cervantes Institute, the "Carol I" Central University Library, or the National University of Music in Bucharest are just a few of the institutions that will host the festival events. Guitarist Costin Soare is here to offer us some more information regarding these festival events.

The IXth edition of the "Guitar Nights" International Festivalis set to host no less than nine concerts in which the public will be able to listen to guitar solos as well as the guitar as part of chamber-music ensembles. Can you give us more details about the performing artists?

Every year, our festival shows the many faces of the guitar, it lets the public discover the many talents of the guitar because we have, as you have mentioned, guitar solos and chamber-music concerts; we will also have an old-music concert, with old-fashioned instruments. Furthermore, we have masterclasses dedicated to young musicians, both pupils and students, a conference that will take place at National University of Music in Bucharest and an online contest with substantial prizes called KitharalogosScolarship that has been happening for two years now.

As for the participants of the year's festival…first of all, I will talk about the headliners. We're talking Pablo Marquez, one of the greatest musicians in classical guitar: don't miss out on his performance, on November 10th at the Central University Library's Aula. Moreover, we will be seeing Rafael Aguirre, a Spanish guitarist and Remi Jousselme who'll be performing for the first time in Romania. So, we'll have three extraordinary recitals on the 2nd, 9th and 10th of November at theCentral University Library's Aula. Should you want to attend, you can reserve your ticket on kitharalogos@gmail.com.

You will be also performing along violinist and songwriter Vlad Maistorovici!

Yes, on the 8th of November, in a concert at the Cervantes Institute called Musicadell'Amicitia. The thing is, me and Vlad were colleagues at the Highschool of Arts in Ploiești. The recital is called Musicadell'Amicitia and it is a recital that exudes friendship and reunion. That's why I thought it best to meet Vlad not only in person, but also performance wise, to reunite among these beautiful pieces that we will be playing on the 8th of November. We will be listening to the History of Tango by Piazzolla, Spanish Folkore by Manuel deFalla and also the first ever performance of a piece written by Vlad Maistorovici himself.

You mentioned the Kitharalogos Scolarship, won through the online contest. How was the competition this year?

The contestants were good, they were very good in fact. We had six contestants and we're growing. Unfortunately, the interest for Romanian contemporary music is still low. Actually, this is the reason for this scholarship, to convince young musicians to join this initiative that I started seven or eight years ago at the Enescu Museum. It is aproject that encourages Romanian composers to write music for this very overlooked instrument: the guitar.