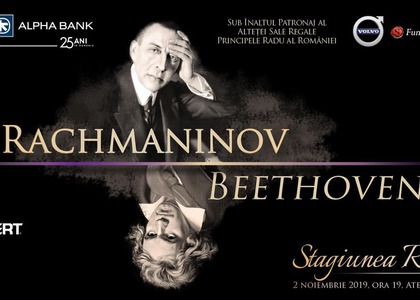 The new season of the Royal Camerata will open Saturday, November the 2nd, starting with a concert at the Romanian Athenaeum. Conductor Sergey Simakov and pianist Nicolae Dumitru are the ensemble's guests. In this interview with Radu Chişu, concertmaster of the Royal Camerata, we find more details on this concert.

The 2019-2020 Royal Season will begin with a concert that is to be held at the end of this week. Before we discuss the two guests of the ensemble, what can you tell us about the performance scheduled on November the 2nd, on the Romanian Athenaeum's stage?

The schedule will be perfect for the audience, one that is more than appreciated by the Bucharest audience - Rachmaninoff's concerto no.2 for piano and orchestra, and Ludwig van Beethoven's Symphony No. 5.

You are collaborating with chief conductor Sergey Simakov and pianist Nicolae Dumitru. How did their collaboration with the Royal Camerata begin?

The rehearsals are excellent. We are expecting the concert to be fantastic. I have met Sergey Simakov three years ago, while he was taking part in the Jeunesse International conducting competition, where he won first place, and the chemistry was there from the beginning. Personally, I have admired him as a conductor and also as a person and we actually discussed, of course, the possibility of a collaboration with the Royal Camerata. As for Nicolae Dumitru, we have previously collaborated, this is not the first time. We enjoy working with him, he is a delightful person, a sensitive artist.

2019 marks a decade of Radu Chișu's work with the Royal Camerata. How will the end of this anniversary year look like for ensemble, after the concert scheduled on November the 2nd?

Naturally, we will have an anniversary concert which will be held on December 14th at the Romanian Athenaeum. We wish to present Ludwig van Beethoven's Symphony No. 9 to our audience, which I consider to be a composition proper to the celebration. In some countries, it is a New Year's tradition. We would like to perform this piece and to celebrate together with the audience on the evening of December 14th the ten years anniversary of the Royal Camerata.