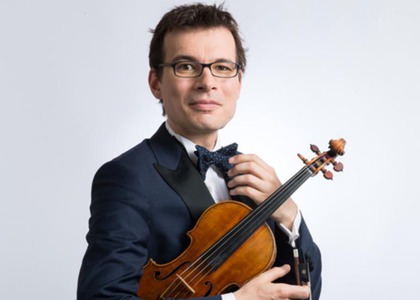 A new concert by the Romanian Chamber Orchestra was held last night at Sala Radio in Bucharest. The details regarding the event, which is included in the "Heirs of Musical Romania" project, have been given to us by violinist Alexandru Tomescu, the concertmaster of the ensemble and one of the founders of the project.

You're on your first tour as concertmaster of the Romanian Chamber Orchestra. How did it all started and what sets this ensemble apart from the other chamber ensembles in the country?

Yes, indeed, it's the first time for me, after many years, I would say, after 20 years. I joined an orchestra as its leader. It's a project which I thought together with my good friend, violist Ladislau Cristian Andriș, with whom I play and with whom I have been organizing for 5 years masterclasses in George Enescu's house in Mihăileni, Botoșani. These masterclasses are mainly targeted to Romanian violinists who left the country. Starting from this project, we thought we could do something even nicer, and this is how the idea of an orchestra came to us. This orchestra aims to bring together the best Romanian musicians who occupy important positions in great European orchestras and give them a chance to come back to Romania and offer the audience what they know how to do best, the music they greatly love. So, the orchestra has a dynamic structure: there are the Romanian musicians from great orchestras, then important members of the Romanian Youth Orchestra, and also students, who are very young, very talented, with whom I have already worked for a few days in Timișoara. This is basically the main idea, what is simply called an orchestra. It's an educational long-term project.

You also perform a contemporary composition, Mikro Divertisment, signed by Dan Variu. What was the criteria of selection from the 11 works that took part in the competition organized by the Romanian Chamber Orchestra?

We asked for scripts from young composers because we wanted to give impulse and bring their works in front of the audience. We were very glad to see we received 11 compositions. The conductor of the orchestra, Cristian Măcelaru, had the last word in choosing the composition.

Bartok, Ceaikovski, Variu. What made you choose this stylistic triangle?

The choice of repertoire has been made firstly to bring before the audience well known works and now I'm thinking mostly of Tchaikovsky's Serenade, and we also want to show what we can perform together, and now I'm thinking mostly of Bartok's Divertiment, an absolutely remarkable piece, which I'm convinced that in some places it will be performed for the first time. Unfortunately, in Romania this 20th century music is still not well known, not enough appreciated abroad, composers such as Bartok, Stravinsky, Shostakovich, who still give chills to music lovers, for us they are part of the great classics. But I think that concert after concert we will familiarize the audience here and grow their appetite for such beautiful, extremely spectacular music.

As we well know today's concert at Sala Radio was preceded by two others in Timișoara and Arad. What other projects are there for the 2019-2020 session, both for you and for the Romanian Chamber Orchestra?

Indeed, I will have a pretty busy session as soloist of the Radio Orchestra. I will perform a composition which is very close to my heart, Dumitru Capoianu's Concerto for Violin and Orchestra. This concert will take place in December. 2020 will be focused mainly on Beethoven, so I will perform Concerto for Violin and Orchestra and Concerto for Piano, Violin, Cello, both by Beethoven, on the Sala Radio stage. There will be many other projects both in Romania and abroad. The Stradivarius tour will also continue in 2020. I already have many ideas from which I have to choose one that I find the most interesting, as here we accustomed the public with the unusual, meaning we always presented the music differently than it's usually done. Then, I promise that we will continue our cultural projects in Mihăileni, the musical ones, by which I mean the masterclass, which already grew greatly and occupied an important position on the cultural market there. We have already been requested in other places. The appetite for culture, music and beauty grew and for me that means we are on the right path.