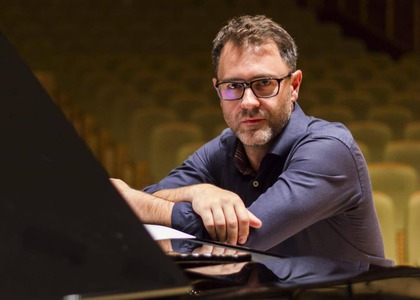 An interview with the pianist Ștefan Doniga, on the record entitled ”The Ladies of Romanian Music”

On Saturday, November 9th, 2019, from 6 PM, the Great Hall of the Cultural Center of the Municipality of Bucharest - ARCUB will be hosting the release event of the record entitled "The Ladies of Romanian Music", produced by the violinist Diana Jipa and the pianist Ștefan Doniga. Being part of an extensive project meant to promote female personalities within the Romanian cultural and social scene, the album "The Ladies of Romanian Music" gathers works of composers such as Felicia Donceanu, Hilda Jerea, Carmen Petra Basacopo, Violeta Dinescu, Laura Manolache and Liana Alexandra. In the following interview, Ștefan Doniga will offer us more details on the record release.

The record contains works written by some of the most important female composers in Romania. What was it that determined you to explore this area of Romanian music?

The legacy that the Romanian female composers left behind, not only to Romanian music, but also to universal culture, is extremely rich and valuable. It seemed to me it would be a shame, from the point of view of the content of Romanian musical research, if there were no materials dealing specifically with this matter or if there weren't more such materials - because they are but few, in relation to the great value of the works, which I have just mentioned. These female composers, these Romanian artists, not only musicians, but also visual artists, these women of value, sportswomen and people of culture - they are a truly important role model, especially for the young. The project we are developing is mainly directed towards this idea. It is mostly an educative project.

You have recorded this album together with Diana Jipa, a young violonist, who, just like yourself, is enjoying a successful career. How did you decide to collaborate for this record?

I have been collaborating with Diana Jipa for two years. Our professional relation and our friendship have lasted for the past ten years, therefore we know each other very well and know we share the same values, so this correspondence has brought us even closer. Two years ago, when we started the collaboration, we didn't expect that in less than two years we would be able to organize almost 100 concerts and recitals, release two albums and travel eight complete tours - all of them dedicated to promoting the creation of Romanian music.

The release is preceded by a promotional tour between October 10th and November 8th, 2019. What has the reaction of the audience at the recitals been so far?

The reaction has bee an enthusiastic one, and not necessarily towards our interpretations, but mostly towards the value of the works we have presented. We have chosen meaningful and important works for this record, and for this project, which, as I was saying, is a consistent one. The process involved documentation, as well as the recording session that we carried out in the "Mihail Jora" Studio, with the valuable partnership of the Romanian Society of Radio broadcasting. Also, this record release, then the promotional tour - all these were possible with the participation and funding of the Administration of the National Cultural Fund, and they address a wide audience.

Are you planning new projects regarding Romanian music?

The record release is set for Saturday, November 9th. The very next day, organized by the same HEARTS-CORE Association, that has produced this record as well, we are opening a new national tour, dedicated to promoting Romanian contemporary music, this time consisting of eight concerts: in Bacău, Ploiești, București, Constanța, Sibiu, Râmnicu Vâlcea, Alba Iulia and Brașov - a project called "Intermeridian".