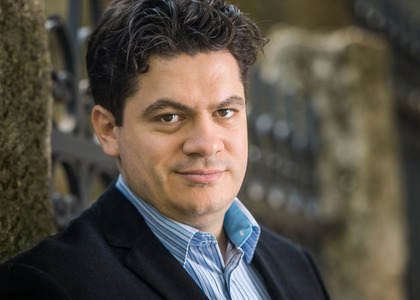 On the 12th of November, 2019, Radio France announced that, starting with September 1st 202, the new musical director of the Orchestre National de France will be the Romanian conductor Cristian Măcelaru. At 39 years old, starting September 2019 hewasdesignated as chief conductor of The WDR Radio Orchestra.

I think `Congratulations` are in order. Please tell us, what lead you up to this position on Frenchterritory?

First of all, thankyou! As for what led meuptothis position, I was invited to conduct the Orchestre National de France and I created a different repertoire, a repertoire focused mainly on contemporary and modern music; and then, towards the end of that week, both me and the orchestra enjoyed each other's company and they invited me to come back as soon as I could. This is usually very hard…since this is such a highly-esteemed orchestra and me being busy conducting…Usually, it is very hard to find an exact date. To accommodate that, they planned an extra concert, a special concert, so that I could come back and collaborate with them another week, to see how well we match. That was earlier this year, inJuly. I came back on stage we rehearsed for one week and then performed, and then, at the end, the musician told me that they wanted to build a long-lasting collaboration, an artistic partnership. Then, we immediately started talking and now we have finally reached the point where this partnership becomes official.

So, this happened after the last year's concert, was it November?

Yes, the first concert composed of Mahler of the Fifth Symphony and with a piece by Pascal Dusapin-Apex and then one about Alan Ber, I think…So, it was a special project, it wasn't romantic music or Ceaikovski or Beethoven, but a unique type of music and we were on the same page about it.

So, they were some pieces that weren't so familiar with the orchestra therefore you had the opportunity to know each other better.

Yes and no, because the moment I came back In July, I conducted the La Valse de Ravel which is a piece that such a prolific orchestra like the Orechstre National de France has certainly played it a hundred times over and I think that they discovered me more while rehearsing for Ravel, because for me it is of the utmost importance (and I hope it shows on stage as well) to deeply understand what the composer tried to convey. For me, this starts with analysing the composition without letting tradition "get in our way", but to enlighten us upon the conveyed essence. It doesn't have to be the main focus of it all. That's why I always look at the pieces that are played more often, I always look at what was cut out from the musical sheet, for the sake of tradition. I have encountered the same thing in Romanian pieces, for example Enescu's Rhapsodies. I encountered some traditions that probably started out as a good thing, but once you start adding on top of these traditions, that itself become the essence of the piece instead of what the composer wanted initially.

We know that, usually, radio orchestras tend to or just simply think that they have the obligation to promote new pieces. That's why I asked if there was any connection between your decision or it was just like you said, just a coincidence…

I very much identify with the modern and contemporary repertoire as well as the classic and standard repertoire, as you all can see. It is true, I am the artistic director and the conductor of the most important contemporary music festival in America and that is a part of my career that I cherish and deem important for me as an artist, not necessarily because it is a mental exercise or a chance to give the contemporary composers a voice, but simply because I am interested in stories that come up with this domain, why they talk about it, how they talk about the music of the 21st Century. And it would be wrong of us and of me personally to not have this curiosity- a true curiosity of how the people of the 21st Century express themselves. That is in order to understand music not as comparison of what Beethoven or Brahms have said, but to understand music as a reflexion of the world we live in and in this way, we may find a link…I, at almost every concert I conduct, play a piece I have never played before, a contemporary piece and a piece by a composer that I personally know and to me that is a choice based on love, not an obligation. It is a personal and artistic choice based on love and passion.

As it happens, your nr. 1 argument can be displayed as the program of your Stockholm concert this week; a first-listen by Victoria BorisovaOllas, followed by a 20th Century piece-The Symphony No. 11 by Shostakovich. Do you think there can be found common elements in these two opposite performances?

Yes. The common elements are that both the Cello Concert and he Shostakovich Symphony are very true to their nature. They have a truly special aura. I'll start with the Shostakovich Symphony; I fell in love with it when I was in high school, I first heard it then I played it and I fell in love with the way Shostakovich tells a story through this symphony, but also raises some questions, but at the same time it evokes certain feelings that reminds us of that January day in 1905. It is important the music connects with the society that brought it to life. At the same time, the Cello Concert has the same elements where the orchestral elements are very rich and intense, with beautiful moments sprinkled throughout the performance. In fact, I can't wait! Having started rehearsals with the orchestra, tomorrow I will have the change to rehearse with TrulsMork, an extraordinary soloist. It is a very sentimental piece that will blossom in the second part of the concert.

So, the first time you listened this symphony by Shostakovich was in Timișoara?

No. I graduated high school in the United States and the first time I listened to it was when I first got there, in high school.

Do you feel anything in particular about this Stockholm society that was somehow built more than 50 years ago by Sergiu Celibidache with whom you are compared at the moment?

I think it's important, form me at least, to look at the core of things and less at the ones who built the structure of it. I surely hear often comparisons with other conductors or thigs which other Romanian conductors have managed to accomplish.

And for me, when I hear these types of comparisons, with Sergiu Celibidache or another conductor who had a wonderful career, who made a name for himself, I feel more of a push towards creating something more wonderful; not to further the comparison, but because I feel a responsibility to fulfill this potential that I think exists in Romania.

A very important thing for me and that is something that I often talk about is that the Romania where I was born and raised was a country that greatly valued education and valued art, promoting and prioritizing them. That's why, with every orchestra I meet and conduct I find Romanians who indeed left the country, but who play in these orchestras and are very appreciated for what they do. That comes as no surprise to me because I also received an extraordinary education as a pupil. I think this is a thing to be proud of.

Our problem, in my opinion, is one of perception, because we have done great efforts to show the world the true face of Romania, the country which had Eminescu and Enescu, but which continues to have a lot of valuable people, cherished for what they do. Very often we see that the only things that are highlighted are the ones shown in the media, the ones that can be easily seen and they usually bring no honour to the country. I am hurt by these things and also by the fact that even the Romanians that talk about the good things are not as proud about what can be found in Romania, what can we discover, this great essence, this tradition of art and education that we should pursue not only because it is our responsibility, but because we understand that it can bring pride and honour to our people…or to ourselves.

I am deeply saddened when I see and meet people who are self-critical in a way that destroys their potential by being complacent of the fact that this is what Romanians are like. I beg to disagree. There are Romanians of great value everywhere, who make beautiful and remarkable things in every line of work whether we talk about art, medicine, literature, mathematics. I've met extraordinary people, the people we should be putting forward, the true values of our country. It does not do well to be overwhelmed by a minority who brings no honour. Every nation in the world has this type of honourless minority, but we must not get lost in it, we must focus on what we can do better, to shine brighter, to build on the foundation that was laid by Enescu and Eminescu!