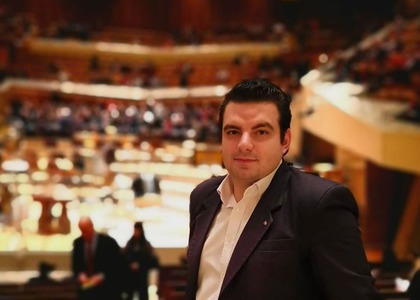 Ploiești Jazz Festival will take place between the 20th and the 24th of November. It is organized by the "Paul Constantinescu" Philharmonic Orchestra and its manager (also the manager of the festival) conductor Vlad Mateescu. A new edition which celebrates the 50th anniversary of the first Jazz Festival in Romania, it has taken place in Ploiești since 2005.

An important anniversary for the first Jazz Festival in Romania with an extraordinary significance. What did this festival mean back in 1969, which came as a breeze of freedom felt behind the Iron Curtain through the music from the free world?

First of all, for the "Paul Constantinescu" Philharmonic in Ploiești it's a real honor to be able to organize such an event, but more importantly, it's a great responsibility to continue what the members of the Jazz Club back in 1968 and 1969 started with this festival. All those concerts, all that boldness, if you allow me to call it that, because that's what it was, it was bold and insane, that a group of 18 individuals tried to organize these special concerts, in 1969, 1970, and even in 1971, the first three editions of the festival which took place in Ploiești. So, it's a great responsibility for us - 50 years since the first Jazz Festival, which we are celebrating now, at the "Paul Constantinescu" Philharmonic, on the same stage, during five days, with worldwide renowned artists.

I see that the selection of songs is addressed to the connoisseurs. You invited great Romanian musicians, as well as celebrated musicians from Europe and the U.S.

As I was saying earlier there are five days of festival, just like it was in 1969. We open the festival with the Symphonic Orchestra, together with the Florin Niculescu Quartet from France, with a selection of jazz manouche and more, then starting from the 21st there will be two concerts each night. Concerts by: Romanian Old Stars with Mircea Tiberian, Garbis Dedeian, Billy Bontaș, Nicolas Simion and Cătălin Răzvan. We also tried to remember how important Romanian artists are, because they deserve to be put forward wholeheartedly, as foreigners might be put forward more. On the evening of the 21st we will go on with a new band, ours, Ploiești Big Band Jazz Society, and the soloist will be Nadia Trohin from the Republic of Moldova. On the 22nd: Ploiești Jazz Trio, with members from our jazz band, Sorin Zlat - piano, Răzvan Cojanu - contrabass and Laurențiu Ștefan - drums, the soloist will be the South African Pilani Bubu, then the Benito Gonzales Trio from Venezuela and Casey Benjamin from the U.S. We thought this festival as a crescendo until the 24th. On Saturday, the Camilla George Quartet from the U.K. and Carmen Souza & The Silver Messengers, and on the 24th, during closing night - the closing not only of these five days, but actually of 21 days as we had other events before this festival. There were concerts, workshops, projections, Dixieland, Jazz in The Bus, projects which delighted the city. Basically the jazz atmosphere lasted for three weeks in Ploiești and it will end with the most important artists. Ralph Peterson, one of the most celebrated drummers today, and The Messenger Legacy, and last but not least the great Ravi Coltrane.

You are also the conductor of the "Paul Constantinescu" Philharmonic Orchestra in Ploiești. What is the reaction of the orchestra to this kind of music? Do they enjoy performing jazz?

Yes. It's a new selection. We're trying, as I said, to keep the tradition and do this every year, we also have similar concerts during our session, it's just that, indeed, it takes a while to find common ground between classical and jazz music structures, taking that strictness of classical music and jazz improvisation, we're trying to find common ground, with different personalities. And we will succeed on Wednesday, for sure.

This festival is supported by the Government and the Romanian Royal Family. What do you want to communicate through this?

It's about the proposition and the request we've made through the years. Last year the festival was supported by the Ministry of Culture. This year, as it was in the case of the first edition, by the Royal Family. For us, and not only for us, it's proof of the importance of this festival, coming from the most important institutions in this field.