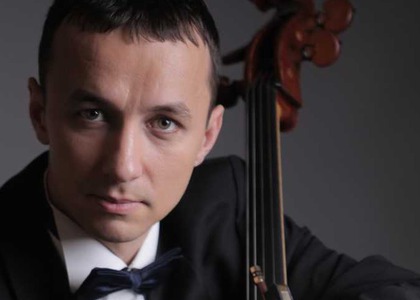 Tomorrow, November 22, you will perform, as soloist of the National Radio Orchestra, the Variations on a Rococo Theme, for cello and orchestra by Pyotr Ilyich Tchaikovsky. How do you describe this work, in the context of belonging to a stylistic triad, which is completed by a contemporary Japanese work and the second symphony from the works of Jean Sibelius?

It is a very important work for any cellist, about which you have an idea, before opening the score. When you first open the score and play the theme, on whose shoulders is built all this extraordinary architecture, which Tchaikovsky accomplishes, you realize that all that simplicity is, practically, blown apart and becomes extremely complicated, starting with the theme. The years go by and then that very complicated thing becomes simpleagain and we basically get to the base, which means the simplicity of the music. That's what it's all about. Each variation has its own personality. It must be said that we will perform a variant of these variations. Some say that this isthe original one, others that the other variant is the original. That doesn't matter. It is the most popular one and I am convinced that it will please the public, especially since I don't remember having played this work with the National Radio Orchestra before.

What can you tell us about your collaboration with conductor Naoto Otomo, who is at the helm of the National Radio Orchestra?

Naoto Otomo is one of the most important Japanese conductors at present. As director of the Radio Orchestras and Choirs, I have invited him for the first timetwo years ago. I am very happy that the collaboration with himis being continued and I can only be honored to be with him, in front of the National Radio Orchestra.

Lately, you have been the protagonist of various musical events, while also conducting a series of masterclasses. What other projects are planned for the 2019-2020 season, as far as you are concerned?

Many more activities are planned. What's important is that there is activity, that we are healthy and that we can sing and bring to the Romanian public quality music and they will definitely appreciate us at our true value.