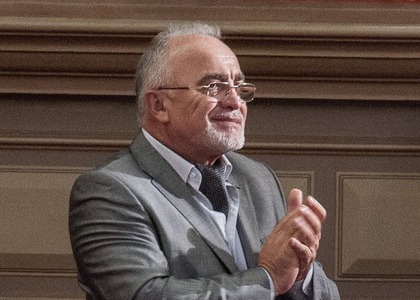 Two CDs by Romanian Youth Orchestra were released in 2019, in the Casa Radio Publishing House collection of Radio Romania Music. The first one - Iarna magică - is a material, which bears the name of an event that has already become a tradition in Bucharest - The Christmas Concert performed in the Romanian Athenaeum, by Romanian Youth Orchestra, conducted by Cristian Mandeal. Radio Romania Music chose different sequences from these concerts, which had been recorded and broadcast live over the years, and the result is an album, with the atmosphere that reminds the famous Vienna New Year's Concert.

Vara magică is the name of the only summer festival organized for classical music lovers, in Bucharest, and it is also the name of the second CD. Radio Romania Music had wholly recorded all the editions of this ten-years history festival. For that first disk, entitled Vara magică, were selected two compositions in iconic interpretations: Cello Concerto in B Minor, Op. 104 by Antonín Dvořák, performed by Valentin Răduțiu and National Symphony Orchestra of Romania, conducted by Cristian Măcelaru, and Symphony No. 4 in A Major, Op. 90 "Italian" by Mendelssohn, in Romanian Youth Orchestra's interpretation, conducted by Cristian Mandeal. Dorin Ioniță, the CEO of Lanto Communication, and organizer of these events, stated about this album releases as follows:

One day I was wonderfully surprised - a proposal, from Casa Radio Publishing House and Radio Romania Music, to release the two CDs: Vara magică and Iarna magică. It was a highly pleasant surprise. It's an honor for me to have been collaborating with both Casa Radio Publishing House and RRM... for more than ten years. These two CDs are going to be released on 21st of December - such a delightful surprise, that I'm really excited/thrilled. Usually, I can keep a cool head, and be composed. This time though, I must confess that it's really hard to control my emotions, because I feel as if I'm almost getting a prize for my work and dedication, in the last ten years. I really hope that the two CDs (Vara magică and Iarna magică) won't be the last ones, or just the first issue of the collection. We have enough material. I've mentioned this collaboration between Lanto Communication and the Radio, with RRM and Casa Radio Publishing House. We've been collaborating for more than ten years now, and there've been more than 100 concerts. The partnership between Lanto Communication and Radio has always been prolific, and respectful, a fact for which I thank Casa Radio Publishing House, and all the wonderful people working there.

The recordings on the album belong to Romanian Youth Orchestra - an ensemble created by conductor Cristian Mandeal, and cellist Marin Cazacu. Each time, they collaborate with young musicians, and each time, by the nature of this ensemble, the generations switch. I'm thinking of those who'd left the Romanian Youth Orchestra, and who are now founding other orchestras. For example - Ladislau Andri
ș, who set up the Romanian Chamber Orchestra... How do you see the ensemble's journey so far?

It's certainly a progress, a great idea, and I can say that after ten years, the results are visible. The collaboration with Romanian Youth Orchestra started from its setting up. We have more than 50 concerts settled up together - Lanto Communication, and Romanian Youth Orchestra. More than 1.000 young men had almost found their way in life, due to the RYO. The fact that these young men are learning here to work as a team, and to play in an orchestra, making individualism disappear, through the friendships tied, through collaboration between them... these are the results! Unfortunately, at least in my opinion, the Romanian music schools are preparing soloists, rather than members of an orchestra, and that's why the disappearance of individualism is so important here. The National Symphony Orchestra of Romania is a product of the first members of the RYO. The other orchestra, initiated by Cristian Andriș - the former member of the RYO, where he shared mutual understanding with Alexandru Tomescu, and other members of the RYO, have found understanding on the part of Cristian Măcelaru. Lanto Communication aims to continue collaborating with this orchestra, too.

Before talking about this year's Iarna magică concert, I'd like to hear more about Vara magică Festival, because we're getting closer to the 10th year of the existence of this edition. You take care about everything that means organization of the festival. How do you see its progress, judging, firstly, by the public attending summer concerts?

The Vara magică Festival has known a constant evolution... from the unique fact of having concerts in summer... it seemed incredible! It seemed incredible that something might be happening in summer Bucharest. The theatrical seasons were all closed... Of course, there'd been many concerts in the city squares, but at that time, even those were barely happening. It was the common idea that everybody left the city for seaside, or mountains, and the city was emptied. It wasn't true at all! After this, Bucharest had been slowly becoming a tourist town. What could we offer tourists ten years ago?! This is how, and why, the Vara magică Festival has been constantly developing. The proof are the crowded rooms in each summer. There are many sold-out concerts, and the attendance is very high. This is an extremely important thing! It may sound as a lack of modesty, but I tend to think, that the Vara magică Festival has already become a Bucharest landmark.

And we're getting closer to the nearest concert - Iarna magică. What are you offering the public with this year's edition?

For this year's edition, we're planning a collaboration between Romanian Youth Orchestra and the "Prelude" Chamber Choir. It'll be a larger concert, but it's an event that, fortunately, will be broadcast live by Radio Romania Music and Romanian Television (TVR). It's also a concert in high demand. The seats are being reserved since summer, and now, the hall is fully reserved. Unfortunately, the Athenaeum Concert Hall, this splendid concert hall, this architectonic monument, has a limited seat capacity. We are still getting request, but we cannot organize more concerts, more editions of the concert. Each Iarna magică Concert must be unique. Not necessarily evanescent, but unique, an only concert. It only happens once, and it should remain in the memory of the lucky ones, who had announced in advance their wish to come, and reserved the tickets, and of those equally lucky, who will be able to listen to the concert while broadcast live on Radio. The programme... don't let me reveal it completely: William Tell Overture by Rossini, Spartacus Ballet Adagio by Khachaturian, and Mendelssohn's Wedding March - in the first part. In the second one - Messiah, an Oratorio by Handel, Enigma Variations by Elgar, Chorus of the Hebrew Slaves by Verdi, and a surprise: Romanian Medley by Sabin Păutza. It will be a grand first audition!