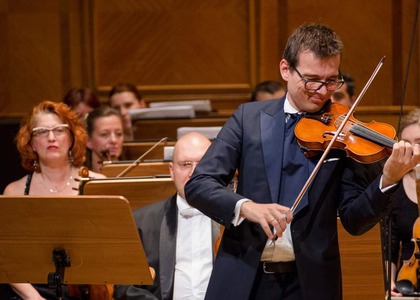 On Friday, December 13, on the stage of Radio Hall, violinist Alexandru Tomescu will performthe Orchestra and Violin Concerto no. 1 from Dumitru Capoianu along side National Radio Orchestra conducted by Rumon Gamba. The artistic program will also feature `Night on Bald Mountain` from Moris Musorgski and the Symphony no. 2 from Ralph Vaughan Wiliam.

Mrs. Alexandru Tomescu, on December 13 you will perform the Orchestra and Violin Concerto no. 1 from Dumitru Capoianu along side National Radio Orchestra. Naturally, the first question refers to this composition. What reasons you had for choosing it?

I had the privilege of knowing master Dumitru Capoianu in his last years; a very cheerful man, possessing a sense of humor which was simply contagious and, most of all, a first-class composer. My father, the pianist Adrian Tomescu, used to collaborate with all the composers from those times and, obviously, we knew each other very well. He even dedicated one of his compositions to me. From what I know, this concert for orchestra and violin was composed in 1957. I noticed that it was a success at the time, but after that it went rather unnoticed, which I believe is unfair. I first had the chance to perform it last year in Turkey, with the Presidential Symphony Orchestra, and I thought it would be a loss if I wouldnt share this spectacular composition with the Romanian audience. Without doubt, you can feel the touch of a master who is excellent at handling all the sounds of the orchestra and the violin as well. The composition is truly magnificent. There are four parts of it; one of them is a rhythm accompanied by a number of percussion instruments a sound bursting of personality and character. Honestly, I fell in love with this concert!

You have been a concert soloist of Radio Orchestras since 2002. How would you describe this long-term collaboration?

Back then, I have won the position of concert soloist by a contest organized by The Romanian Radio Broadcasting Company. I believe the most important thing is to never stop discovering and exploring new things, because when you set a goal of only maintaining the level you achieved, at some point you will become bored. Throughout the seasons, by performing alongside the radio orchestras, the National Orchestra, the Chamber Orchestra, I had many opportunities to explore different repertories, which are slightly out of the comfort zone of Romanian orchestras, maybe even of the Romanian audience. But I see the mission of educating, as well as supporting growth and the enlargement of the audience perspectives regarding music as a really important one. This way, we have the chance of discovering real treasures like this concert from DumitruCapoianu, together.

The National Radio Orchestra will be conducted by the British conductor Rumon Gamba. Did you work together before?

No, this is the first collaboration. Im really looking forward to it. Abroad, such compositions from the 20th century, even the 21st century, are always included in the repertories of concerts. Therefore, I believe we have all the premises of having a wonderful concert.

This year you organized another edition of the Stradivarius Tour. You also initiated the project Romanian Chamber Orchestra, alongside violinist Cristian Andri. What are the next projects for 2020?

It will be a very important year for all the musicians. Obviously, the first thing that comes to mind is the anniversary of Ludwig van Beethoven, but I would like to go further than this special event. We will go on with the Stradivarius International Tour, then with the educational projects: the masterclass from Mihileni, at the house of George Enescu, as well as other cultural projects we are organising there. The project Romanian Chamber Orchestra will also continue, of course; there will be an evolution of this project since this first series of three concerts from this autumn was highly successful. And, no doubt, I also have other surprise projects that will be announced at the right moment.