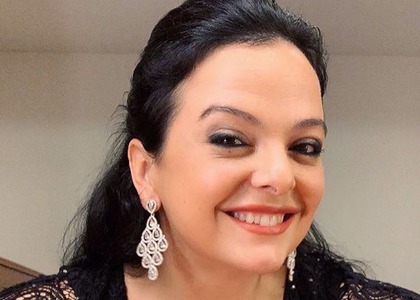 Roxana Constantinescu - on the tour which has just ended

Earlier this month, between the 1st and the 8th of December, mezzo-soprano Roxana Constantinescu held a European tour. You'll find out from the interview with whom, where and what she performed and how she met conductor Thomas Hengelbrock.

Roxana Constantinescu, you have just completed a tour with the ensemble Balthasar Neumann and conductor Thomas Hengelbrock. Was this your first collaboration with them or did you already know one another?

We didn't know one another. It was the first time I had the opportunity to work with Thomas Hengelbrock and his ensemble. Fortunately, it was a very interesting and intense experience for me and for us, because this tour took place practically in a week and included six concerts in six very important venues around Europe. So, I feel fortunate to have been part of this project. Thomas Hengelbrock had seen me on YouTube, can you believe that? That's what he told me when we met. He contacted my agency, he had tried to get in contact with me during other projects but I happened to be busy, this time it was different.

There were concerts in Austria, Germany and Luxembourg with a very interesting repertoire. What did you perform?

The program was called Christmas in Moscow and Paris and there were Russian composers...besides Tchaikovsky who, of course, is very famous, less known to me at least, were Glazunov, Chesnokov and (.....), and in the second part of the concert I performed the Saint-Saens Christmas Oratorio. He decided to do this because he said that every time these Christmas concerts start, when they take place, everyone expects a fairly well-known, popular repertoire, and he wants to help the public and even us, the musicians, to discover other works. The first part is mainly with a cappella works from Russian sacred music and the second part, obviously, is the Oratorio together with the orchestra, choir and soloists.

Was it difficult to learn the repertoire, which I suppose was new?

It was new, yes, absolutely the whole program for me was new and the first part turned out to be very difficult for me simply because I don't speak Russian, but what I greatly appreciated was the organization and what this Balthasar ensemble actually represents. Neumann and everyone else in charge, from the technical side to the administration and so on... We received the scripts, as well as the audio files about the pronunciation in Russian, many weeks in advance; I had a Russian teacher who was present during the rehearsals and who made sure that the intonation and pronunciation were as authentic as possible.

Was the audience attracted to this kind of repertoire which is lesser known, lesser performed during this period of Advent? Have you had a large audience?

Yes, most concerts were sold out. The audience was very interested in it and I think that what caught their eye at first was the reputation of Thomas Hengelbrock and the ensemble as a whole, but then I am convinced that they went home with the pleasure of having seen a very nice program and concert. In fact, the music performed is wonderful! Unknown, yes, but wonderful at the same time, and it certainly had a strong impact on the listeners.