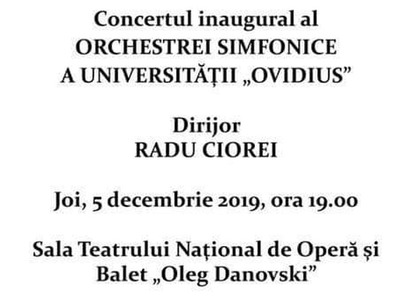 Recently, you have conducted the first concert of the University Symphony Orchestra "Ovidius" in Constanța, an orchestra that made its debut this month on the Romanian music scene. How did the idea of setting up the ensemble start and what is the purpose of this project?

In my travels around the world I have come across university orchestras several times and had the opportunity to meet and work in the university environment. I remember, many years ago I held a masterclass with rehearsals followed by a concert at Northridge University in Los Angeles and I saw how this type of orchestra works. Generally, the major universities of the world have their own sports teams, theater, orchestras, choirs and so on and all these compete for an image of the respective university. Coming back to the idea of ​​a university orchestra, I would like to say that they are, in fact, amateur orchestras that benefit from the support of some professionals and are made up of students, former students, university staff, sympathetic members, etc. and there is not, as in professional institutions, a permanent internship because the student program does not allow it - they have courses, exams, holidays. So, generally, there are around three or four concerts in a maximum of one academic year. The idea came to me when I contacted the European Association of University Orchestras and saw that Romania did not exist as a member; In contrast, there are nearly 150 major universities in Western Europe. I had a first try in Cluj, my hometown. I tried to include this orchestra in the European association, on the other hand, when I presented the project of the rector Mr. Sorin Rugina, he immediately understood the international impact on Ovidius University. The Board of Directors approved with great enthusiasm the project and, in just six days, the Orchestra of the Ovidius University was immediately welcomed in this European association, officially becoming the first orchestra of its kind in Romania and Eastern Europe.

We know that there are members in the orchestra that are music lovers, who do not necessarily work in the field of music. In this category we can also mention the Orchestra of Doctors and the Symphony Orchestra of Babeș-Bolay University, whose coordinator you were in 2018. How is it that you work with a group consisting predominantly of amateurs?

This orchestra from Constanța actually consisted of current and former students and teachers from various faculties, who studied an instrument in music high schools or in particular. But we wanted to make a connection between the educational institutions and the professional ones of the spectacle, a fact from which everybody will have to win. So we also co-opted the high school students from the National College of Arts "Regina Maria" Constanța to lead them to the university, to acquire orchestral experience, considering them as a preparatory year for the university, as the preparatory year for school. And, at the same time, we still have at least first support from teachers from the college of arts and professional instrumentalists from the National Opera and Ballet Theater. So it is a more special orchestra, made up of three generations of musicians.