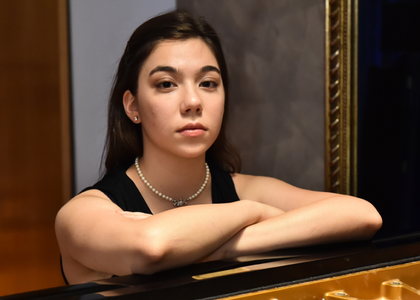 On Tuesday, 21st of January 2020, at 19:00, pianist Kira Frolu will hold a recital in the Small Hall of the Romanian Athenaeum. The program will contain Sonata in C Minor, Hob XVI: 20 by Joseph Haydn, Etude in C minor, Op. 25 No. 12 by Frédéric Chopin, three preludes by Claude Debussy, "Alborada del gracioso" from the Miroirs suite by Maurice Ravel and three pieces from the Petrushkasuite by Igor Stravinsky. In the following interview, pianist Kira Frolu gave us more details about this recital and about her life as an artist.

Going through the program of the recital, I've noticed that you ordered chronologically works by Haydn, Chopin, Debussy, Ravel and Stravinsky. How did you do this musical "itinerary"?

It is certainly a chronologically ordered program, but there are several reasons behind this decision. The piano has evolved over the years, from harpsichord to an instrument that can replace an orchestra, and the first piece with which the concert begins is a sonata by Haydn, very pure, very simple, in terms of harmony and texture, and during the concert we will go through several pieces that experiment with sonorities, emotions and end with the orchestra reduction of the Petrushka suite from Stravinsky.

I've seen that you approach a diverse repertoire, stylistically. Do you have a composer or style that you feel a closer connection with?

For now, I like all styles of music because of my studies, but also because of my preferences. I like to go through different styles. There are several pieces from the 20th century in the program, but all the pieces I perform are chosen by me and I like to experiment with each one.

What do you think are the challenges of a solo recital?

In a solo recital all ears and all eyes are focused on one person, so the artist has to capture the attention of the audience throughout the concert and, at the same time, there is no pause, so the chosen repertoire requires a certain physical and mental and psychological strength, so, the repertoire on the 21st of January is quite new, so it will be a challenge to see how I will deal with it.

From 2018, you have been studying at the Royal Academy of Music in London. Are there differences between the artistic environment there and the one in Romania?

In Romania I had no experiences at the Conservatory, but speaking from the point of view of competitions or the environment in general, it seems to me that here the environment is much more active, and one has the opportunity to socialize more with other artists, to share experiences. There is this eagerness to share opinions about music and there is...this feeling that everyone is working and going in a certain direction at all times.

Do you have any other projects scheduled for the next period?

The next academic term will be very busy, we will have many exams and some concerts at the London Music Academy. I will have a recital with singer SimionNovac. We will perform several songs for voice and piano, and among other concerts I will also have a performance with the Bacău Orchestra, the MihailJora Philharmonic, performing Concerto No. 2 (by Sergei Rachmaninoff).