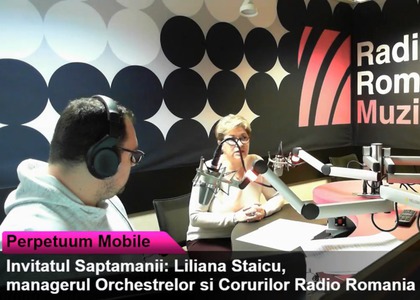 The Beethoven 250 Series – at the Radio Hall

The Radio Romania Orchestras and Choirs hold in 2020 a series of events dedicated to the anniversary of the International Beethoven Year, officially celebrated throughout the world, to mark the 250th anniversary of the birth of the great composer. On Wednesday, January 22nd, Liliana Staicu, the manager of the Romania Radio Orchestras and Choirs and the Guest of the Week in Perpetuum Mobile, talked of this series of concerts during an interview by Lucian Haralambie:

Thank you for having me!

We are talking of the Beethoven Year because, at the Radio Hall, we propose a new project to our audience, a project that had its debut last week with a concert by the Radio Chamber Orchestra conducted by Tiberiu Soare. Firstly, let's talk about some reactions following the concert. We were in the room, both of us present ...a successful evening, I shall say.

A very successful evening indeed! I am so glad that the Beethoven Year had such a lovely debut. As all listeners certainly know, this year marks 250 years since Beethoven's birth. There are events related to this anniversary all over the world and of course, we, at the Radio Room, could not omit a project that we have been thinking of since January 15th. As you have mentioned, this is a concert that took place with Tiberiu Soare at the conductor's stand and Adela Liculescu - soloist, an exceptional program, perhaps one of the most beautiful Beethoven programs, with the Coriolan Overture, the Emperor and the Eroica Symphony ... A packed room, an overcrowded room, with a wonderful audience that reacted to this Beethoven chamber version - because, in fact, this was the type of orchestra for which Beethoven wrote, a smaller orchestra in terms of size. A concert with a special audience, outstanding and unexpected guests in the hall, a concert that was part of the Beethoven Radio project - 250 of the European Union; the concert was broadcasted on the European Union radio network and taken over by multiple member public broadcasters. Therefore, an event that I reckon has created such a project the way it is supposed to.

And, specifically, how will the Beethoven - 250 project continue at the Radio Hall?

Throughout the entire year, therefore in the season we are in now as well, but also from October to December, in the 2020-2021 season, many, many Beethovenian works will be heard. I could say, even an integral part of the Beethovenian works - concerts and symphonies. More specifically, as you mentioned, there will be four fully Beethovenian programs by the end of the season, but in many other concerts - as well as of the National Orchestra, and of the Chamber Orchestra - Beethoven symphonies will be heard in a different context. On March 13th is the upcoming full Beethoven program, a concert that has aroused an extraordinary interest, so unfortunately, tickets for this event are no longer available...

But the concert will be broadcasted on the Musical Romania Radio.

Indeed, on the Musical Romania Radio and Cultural Romania Radio. This is the Triple Beethoven Concert, with violinist Alexandru Tomescu, cellist Răzvan Suma and pianist Sînziana Mircea, along with the Sixth Pastoral Symphony, in a program conducted by the young Austrian Patrick Hahn. Afterwards, in April, another Beethoven program, this time with Cristian Mandeal and Mihai Ritivoiu - Piano Concerto No. 3 and Symphony No. 5. And we will end the season in June - June 17th and 19th - with the Chamber Orchestra which will have David Grimal as guest. He will be the soloist and conductor of the concert; he will most certainly perform the Concerto for Violin and Orchestra and will of course conduct it together with the Seventh Symphony. And on June 19th, an apotheotic end of this season, with Missa Solemnis under the baton of Sascha Goetzel.

Now I would fancy for us to discuss the second part of this year, the beginning of the 2020-2021 season. The program, rightfully speaking, is still being worked on partially ...

I can reveal several details undoubtedly related to the Beethoven - 250 project to you. If we conclude the season with two Beethoven concerts, we will open in the same manner. In October, on the 2nd and 7th, two concerts of the two ensembles - the Chamber Orchestra and the National Radio Orchestra, but the Academic Choir as well. At the Chamber Orchestra, the concert will unveil a surprise because we will present the Beethoven Triple Concert once more in a different interpretation, in a chamber orchestra formula. And the National Orchestra will open the season with the Symphony No. 9 under the baton of conductor Duncan Ward. And, most certainly, we cannot not end the Beethoven Year on the very day of the 250th anniversary of the birth of the titan in Bonn, more precisely December 17th. It is a Thursday and the concert of the National Radio Orchestra will take place exceptionally that precise day; a program that will also include The Fantasy for piano, vocal soloists, chorus, and orchestra.

Therefore, a full year, Beethoven concerts... but I would like for us to return to the current season, 2019-2020. The following concert of the National Radio Orchestra will take place once again, on an unusual date, on Thursday, tomorrow. What is the program of this concert?

A concert that offers the opportunity of several unique meetings. It will be conducted by Jozsef Horvath. After the Rosamunde Overture by Schubert, there will be a concert for organ and orchestra. The organ in the Radio Hall, which is the largest in south-eastern Europe, will be heard tomorrow night with a Handel concert performed by organist Dan Racoveanu. And in the second part, it is a work that is interpreted for the first time in Bucharest; it is the First Night of Walpurgis Op. 60 by Felix Mendelssohn, a work for soloists, choir and orchestra - the Academic Radio Choir led by Ciprian Țuțu and soloists Sorana Negrea, Liviu Indricău, Daniel Filipescu and Filip Panait.

It is a concert that is going to begin at 7 PM and that will be live broadcasted by Musical Romania Radio, as always. Mrs. Liliana Staicu, thank you for your presence in Perpetuum mobile!

I thank you very much as well and I invite the audience to listen to us on the Radio or, shall it be possible, to be present in the concert hall from time to time.