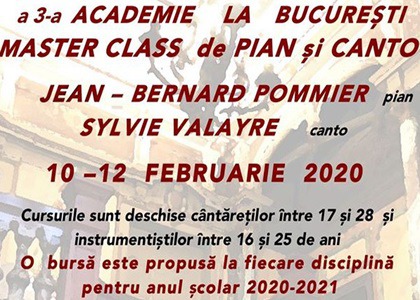 An interview with Alina Pavalache

During February 10th- 12thof 2020, the "Alfred Cortot" Normal School in Paris and the "Noesis-Enesco" Association are organizing a series of mastery sessions at the "Dinu Lipatti National College of Art" in Bucharest. On its third edition, the series of courses this year is dedicated to young singers and pianists. As coordinator of this project, pianist Alina Pavalache offered us more details on the event.

As it happened during previous editions, the collaboration between the "Alfred Cortot" Normal School of Music in Paris and the "Noesis-Enesco" Association will bring important personalities from the world of music to Bucharest. Since this year's teachers will be soprano Sylvie Valayre and pianist Jean Bernard Pommier, how do you think that the atmosphere will be like during classes?

I hope that it will also act as a revelation for the two teachers coming from the Normal School to teach young Romanian instrumentalists and singers - because I am confident they will discover exceptional artistic talents and skills -and certainly, for the students it will be a revelation to receive the advice of such masters withremarkable careers as performers and who are highlevel educators.

At the end of the courses, a scholarship at the Normal School of Musicwill be awarded. What possibilities does this give to young musicians?

A scholarship will be awarded for each field - one for piano and one for singing - which means a year of study at the Paris Normal School of Music, which is the most prestigious private higher education institution in France and one of the most important in the world, of the level of Juilliard School or Guildhall School in London. They have the opportunity to meet businessmen, to perform at the renowned Cortot Hall, to get into contact during the master classes organized by the Normal School with other masters than the ones they are studying with during the year and,of course, they have the chance of living inside the Parisian and French musical environment.

The final concert on the evening of February 12thwill take place in the Atrium of the French Institute. Will we listen to Sylvie Valayre and Jean Bernard Pommier as a duo?

We have not foreseensuch a performance. As project coordinator,I will try, to propose the idea of having at least a small lied from French literature, for the pleasure of the spectators and the disciples. Instead, the public in Bucharest will have the opportunity to listen to or relisten talented young people in the Atrium of the French Institute, an exceptional setting, patron of this event for the first time.