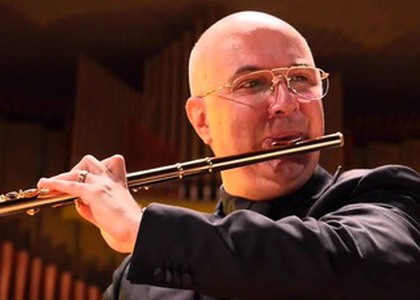 On the stage of Sala Radio there is a concert under the title "Romantic Evening", proposed by the National Radio Orchestra, whose soloist is Ion Bogdan Ștefănescu.

If I'm not mistaken, the last time you performed on the stage of Sala Radio was two years ago. How do you see this meeting with the National Radio Orchestra?

Honestly, I was very eager about it because it's an orchestra that I really appreciate. I also have many colleagues and friends in the orchestra, so it is always a joy for me to be able to collaborate with this excellent orchestra. I think it will be, as announced, a romantic evening. The program is superb and I think it will be a delight for the public, especially since I will perform some works which are a little or not at all sung in Romania: Chopin's Variations on a theme by Rossini, which were specially orchestrated for me by Doina Rotaru and Concertino by Chaminade - works that are very rare in the seasons of our orchestras. So it will definitely be a premiere for the public and it is a premiere for the orchestra as well. My colleagues have confessed that they are delighted, that this is truly exceptional music.

How would you describe the stylistic differences between the two works that you will interpret: one - written in the first half of the 19th century, and the other - composed at the beginning of the Modern Period, in 1902?

This piece by Chopin on a famous theme by Rossini was a kind of school work, but very well crafted, very well conducted -one can observe the touch of a genius. However, the work gains enormously by the fact that it was orchestrated by Doina Rotaru, a very special and spontaneous refinement, because the orchestra is so colorful, very refined, thin, translucent but always with surprises. And Chaminade was a famous composer in her time. I know she came to the American continent too, and the Americans loved her so much that in half a year Cécile Chaminade already had over a hundred fan clubs. This Concertino has made rages in the history of music, surely, and through prestigious interpretations. The flute players immediately took over this piece that she initially composed for admission to the Paris Conservatory. It is a rule kept today, I think, for a prestigious composer to compose a work that students must somehow interpret at first hearing; they are not allowed to study with any teacher, they are given two to three weeks before the exam. However, this work in 1902 was composed exactly for this reason. Later, she orchestrated it and came to be sung on all stages of the world. it is a work on the border between the romantic vein and moments related to the Impressionistic current in the orchestra. It is a spectacular work, with a lot of musicality. It is always adored by the public. I think it will be a very beautiful evening and I am glad that I finally have the opportunity to sing this work in Romania.