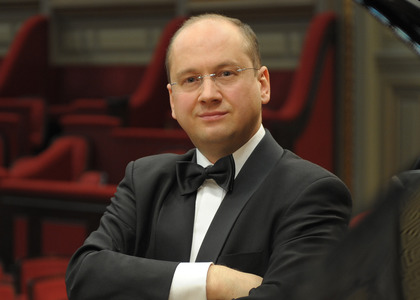 At the Romanian Cultural Institute in London a recital is held by violinist Remus Azoiței and pianist Eduard Stan. The event is part of the series dedicated to George Enescu, also having a diverse program. Both about the program and the relationship with the violinist we find out more from Eduard Stan in the interview below.

I understand that you have celebrated 20 years since the beginning of the collaboration between you and the violinist Remus Azoiței. How do you remember that beginning?

It was a very funny start, in the sense that we actually met on the street, in Hannover, where I was still a student. I didn't know him, personally, I only knew from a pianist colleague that she occasionally collaborated with a Romanian violinist. That was all I knew. And here, one day, I met them on the street and found out they were going to have a gig the next day. I went, listened to them, and by the way, I also listened to the first major work by Enescu, the Second Sonata for Violin and Piano for the first time and, of course, Remus Azoiței excited me. We proposed to try something next year, a series of concerts together, even from a cold start. And this was the beginning of a long road that brought us very good results and now we are entering the 21st year of collaboration.

On February 6, you will hold a recital at the Romanian Cultural Institute in London in the series of the Enescu concerts. On the poster, we find works signed by Johannes Brahms, Ludwig van Beethoven and George Enescu. What significance do these works have in an event dedicated to the Romanian composer?

Basically, the combination of the program is to have two Viennese works, among which the Brahms work, which Enescu personally knew and sang in Vienna in the conservatory orchestra under Brahms' wand. And the coupling is with a work of great refinement and old age of Enescu, the last major opus for violin and piano, the Impressions d'enfance.

It fits well,now being the year dedicated to Beethoven and is a sonata that we sing with great love, one of the great sonatas, Do Minor, which for Beethoven is a very special tone, the tragic tone.

Yes, we will have at the end of February and the beginning of March three concerts, even with different programs; a full Brahms - all three sonatas, then two days later - a bit like what we do now in London, then, after another two weeks, I will perform three solo concerts with a water themed program - piano music inspired by the element of water. An old idea that I recorded it on CD almost 20 years ago and by chance I returned to the program, which is a little changed, but is still a very spectacular concert.