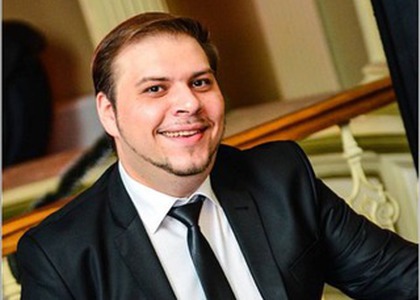 On February 13th, at 6 pm, the Sorin Zlat Trio will join the national pre-selection stage of the Euroradio Jazz Competition held by Radio Romania Musical at the Bucharest National University of Music.

You will join the national pre-selection stage of the Euroradio Jazz Competition, together with your namesakeensemble. What can you tell us about the members of the ensemble and about its history?

The trio came to life 10 years ago. The first formula included Adrian Flautistu - contrabass and Laurențiu Zmau. Along the way, the trio's structure changed and now I have Michael Acker - contrabass and Iulian Nicolau - drums. I had the opportunity to listen to Iulian a couple of years ago, thanks to the jam sessions held in Bucharest. He got my attention. He is a very good musician, a very good drummer and I decided to get him involved in this project. It was the same with Michael Acker. I actually met him at the Conservatory, when I was a maestro and I was surprised by his progress. He first started playing the bass guitar. He revolved around the funk, groove area and, at some point, he started moving towards the contra bass, which caught my attention and thus I decided to add him in this trio. Afterwards, we began a series of concerts, festivals, clubs. We worked together and we have been collaborating in this formula for two years.

What does this competition mean to the Sorin Zlat Trio?

It is a very good opportunity that this trio becomes more famous. I don't think it's necessary about the prize because I have taken part in very many competitions, I have a pretty rich record and I realised that it's very good to attend such competitions in order to get to know people. Because, usually, during a high-level competition, there are all sorts of agents, promoters, managers and so these events are very good places for musicians, for them to experiment and to make new relations.