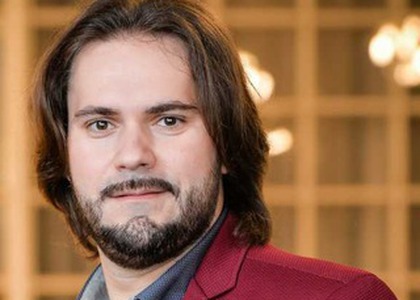 On February 29, 2020, the traditional Ball of the Romanian National Opera in Cluj Napoca was scheduled. The stars of the evening- the soprano Adela Zaharia, due to vocal unavailability, was replaced by the soprano Mihaela Marcu, who performed alongside the tenor Ioan Hotea and the cymbalist Marius Preda. The musical program, directed by David Crescenzi, includes orchestral, soloist - vocal and instrumental moments: waltzes, arias, ballads, musical fragments with dancing character, thus being accompanied by the performance of the pairs of soloists of the ClujRomanian National Opera Ballet Ensemble . During the event the Excellence Awards will be awarded, among which we mention the "Alexandru Fărcaș" Award for Young Talents, the "Lya Hubic" Prize and the Grand Prize of the Transilvania Leaders' Foundation. I discussedabout the ball with Florin Estefan, the manager of the Cluj Napoca Romanian National Opera.

If I am not mistaken, the Cluj Napoca Opera Ball has reached its 26th edition.

Yes indeed. This Opera Ball had also been held before the 90s, if I remember well, it was during the mandate of Mr. Emil Strugaru, who had this initiative, but we are also counting the latest editions and this would be, somehow, the 26th.

As far as I know from last year, the Cluj Napoca Opera Ball is intended to look a lot like the Vienna Opera Ball.

Indeed, this Ball was organized by Dr. Matei Miko, until three years ago, when it was purchased by someone and donated to the National Opera Institution and now, it is virtually the third edition since we took it and somehow changed its format. Certainly, we were inspired by others' good practices and since it is an Opera Ball, the standard is Vienna Opera Ball and we tried to give a shape to this show, drawing on what the Viennese do, of course, respecting the proportions.

I was reading in a statement that there is a dress code and last week you posted on the work's facebook, a kind of documentary in which you explain to the public, what this dress code means.

In this ball format, the audience, from our point of view plays a role in the ball and thus, in order to be a character one must adhere to a dress code. The dress code is the classic one, of black tie and white tie. Here we strictly adhere to this aspect, because it confersthe noble note on this event. The ball is the place where you can wear a decoration given by the authorities, the church, the presidential administration or another decoration -it is the place where you can wear that necklace and decoration, on your tail coat or on your tuxedo.

Of course, the prestige of a ball is also given by the fame of its the guests. Last year, besides the guests of the Cluj Napoca Romanian Opera, you invited the soprano Anita Hartig and the tenor Teodor Ilincăi. What can you tell us about this edition's guests?

This year I invited Adela Zaharia, who, last week, was nominated for the Lyric Oscar. Adela Zaharia and Ioan Hotea are both winners of the Placido Domingo competition, Operalia. In addition to them, I invited the cymbalist Preda, who will somehow be the cherry on the cake, because it is a bit out of the ordinary to have some works for the cymbal and the orchestra, but I think it will be a great success, through his presence and the pieces he will perform. The music direction belongs to the artistic director of the Romanian National Opera in Cluj, Master David Crescenzi, and the director is Mihaela Bogdan.

I know that last year, the singers wore very beautiful costumes specially designed for them. Will they wear special costumes this year too?

We have a colleague, Ovidiu Pop, a costume designer who worked in his creation studio to dress certain soloists.

What does the evening program contain?

We have been trying to go somewhere in the more popular area of ​​old hits, just to teach people and to make them watch these live shows and broadcasts. We've tried to combine both Romanian and international music. There will be Hora staccato, there will be the Danube Waves, the Blue Danube, there will be Strauss music, ballet excerpts from the Swan Lake, from the Nutcracker, Ah, mes amis,from the Daughter of the Regiment, which will be performed by Ioan Hotea and Je veux vivre from Faust, interpreted by Adela Zaharia. There will be some pieces from Vladimir Cosma's creation, performed by the cymbal and orchestra with Master Preda.

Last year you offered distinctions to personalities. Will this happen again this year?

Yes. There will be a trophy, Transilvania Leaders, which is offered only to a personality and only once a year, at the Opera Ball. Last year it was the first time the first trophy was awarded and it went to the Academician Haiduc. As regards the National Opera, there are four prizes, namely: theLya Hubic trophy, for a female voice, the Popovici-Bayreuth trophy, for a male voice, the Taub Darvaș trophy, which is awarded for the first time this year, for a ballerina and the Alexandru Fărcaș award for a young talent.

Mr. Florin Estefan, what's on next after this ball at Cluj Napoca Opera ?

Next week we will have Lucia de Lammermoor, for which we invited the soprano Mihaela Marcu from Timisoara Opera - she will made her debut in this role - along with Ovidiu Daniel Purcel, who has recently moved to Cluj: he was a soloist of the Dusseldorf Opera and remained one of this opera residents. We'll have Turandot and Boema in March. We are preparing for the month of April, when after a few-year break, we will re-stage one of our productions - Cavalleria rusticana, and Tannhauser, in the Holy Week. We are preparing intensely, I would say, for the premiere of Aida, which will be held on 25 May this year - this performance will mark 100 years since this institution first show. Basically, for our anniversary we will have the third premiere of Aida.