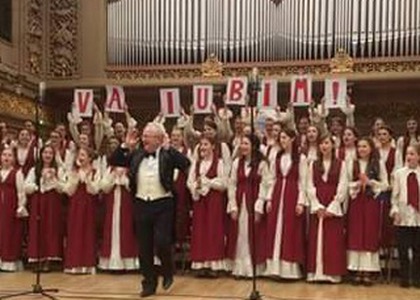 On Saturday, the 7th of March 2020, a concert is being held at the Romanian Athenaeum, celebrating 80 years of life and 60 years of conducting of the founder of the "Symbol" Choir, Jean Lupu. Find out about the significance of this event in the following interview.

This year is an anniversary for both you and the "Symbol" Choir, which marks the 30th anniversary of its establishment in September. Tell us about the significance of this event for you!

It is a dream come true for me! I always wanted the youth to sing religious music as well as the carols I was singing at their age and I managed to achieve this dream in 1989. I had been trying to achieve it for a long time, and, to a very small extent, I achieved it subtly; in the sense that I got carols on radio, I also have them on a platinum disc made during the 80's. But, after 1989, I fully achieved this dream by establishing the "Symbol" children's and youth choir.

Before the concert, from 5 pm, there will be a relaunch of the books "Educareaauzuluimuzicaldificil" ("Educating the difficult musical ear") and "Gâzeșiflori" ("Insects and flowers"), as well as the launch of a new volume signed by you, "Borne pecale". What it is about?

"Gâzeșiflori" includes 45 personal songs, which are highly sought after by educators, parents and music teachers. This volume was initially published in 1996; I revised it, completed it and re-edited it. "Educareaauzuluimuzicaldificil" is a scientific, scientific-pedagogical research book, also highly sought after by the music world and others. This volume appeared in 1988. Since then, you can imagine, people are looking for them because such materials with such a vision of pedagogical optimism have not been published in Romania. That's why I found it appropriate to re-edit it. And for the first time I launch the volume "Borne pecale", in which I have collected in the same volume a good part of the articles and interviews given by me and published by me in various publications and magazines in the country and on radio and television. All these are revised, had their spelling updated, but fully preserving the meaning and authenticity of the articles and interviews of the past.

Looking back, what are the satisfactions of these 60 years of being a conductor?

I didn't think I would reach 60 years of conducting. When I was sick in the sanitarium, I had TB, I asked God to help me reach the age of 60. Here I have a bonus from God! I reached the age of 80 and 60 years of conducting, which is an old dream of mine. I wanted to reach 60 years of life. God blessed me and I reached this threshold of conducting being healthy. I have a clear mind, I have the power to work, I have energy. The voice no longer helps me and that's why I left theteaching of the choirto my colleague LuminițaGuțanu-Stoian, and she fulfilled this role of conductor and director of the "Symbol" Choir very well. I, as president of the association, will continue to be at the forefront of the "Symbol" Choir.