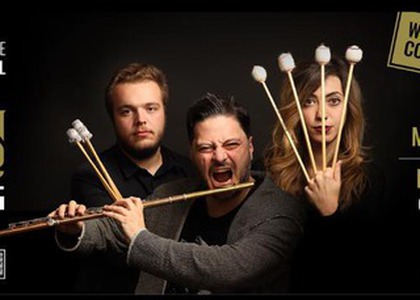 For starters, please talk to us about the "Legends" National Tour. Where did this unique collaboration with Duo PERCUSSIONescu start?

It's a great joy for me to announce a project as ambitious and as impressive from many points of view. The idea from which the Legends project started was the desire to collaborate with Romanian musicians of great value and, on the other hand, to contribute to the development of an almost non-existent repertoire in a totally new formula, namely flute, marimba and vibraphone.I had already known about Duo PERCUSSINescu. They are a young ensemble, but in a fantastic ascent; they already have a very rich repertoire. However, there was a missing piece in this formula - and this is how it came the idea of combining two totally different worlds, but which, notheless, meet in a virtuoso and very attractive way, namely the world of rock music and the world of contemporary classical music. The starting point is represented by some legendary songs of some well-known bands in the area of rock music, songs which are reinterpreted through the collaboration with several composers both Romanian, but also foreigners, including Sabina Ulubeanu, Mihai Măniceanu, Gabriel Mălăncioiu, Margareta Ferek-Petric, the composer of the year in Austria, Jacob Elkin, Andrei Petrache; they are composers who have dedicated these works to us and who have started from their favourite rock music and, who present it in a very interesting and attractive way to the public.At the same time, as far as the arrangements of some very well-known works are concerned, a new collaboration of mine with the composer Jorge Rojas from Venezuela, a very well anchored composer in the world of crossover music, and who has made some fantastic arrangements. What brings the novelty of this collaboration is first and foremost the fact that we play these rock songsusing some classical instruments by definition, with an extraordinary timbre colour. It will certainly be a great success, especially internationally, but as you can see, these ideas have been well received in Romania, as well. Already 12 concerts have been gathered in a series of Legends concerts - 12 concerts in 12 cities, starting from March 26thuntil April 9th, when we will end this tour at Teatrelli in Bucharest. I am convinced that this is a project that you will enjoy very much!

The marimbaphone and the vibraphone are versatile instruments that can be played both as solo and as accompaniment. How do you feel that your interpretation is influenced by the camaraderie of the two percussion instruments?

It's a great combination of instrument. These tools complement each other very well from a timbral and stylistic point of view. Considering these are two melodic instruments, but with a different ambitus and timbre ... if we talk about the marimba bass, with a warm sound, a very wide ambitus and the solo presence of the vibraphone, see, we have an absolutely fantastic combination of instruments. I am extremely pleasantly surprised that we are among the first ones, in any case, the only ones in Romania who propose such a chamber formula, precisely because we believe that these instruments complement each other absolutely wonderful.