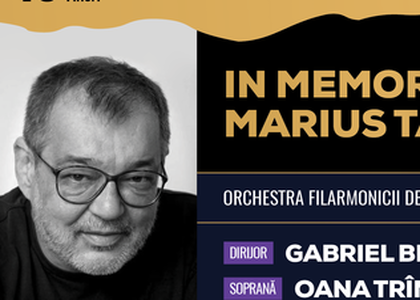 Interview with Oana Andreica, artistic advisor of the Cluj-Napoca Philharmonic

The "Transilvania" Philharmonic organizes a concert in memory of Marius Tabacu, the director of the Cluj institution, who passed away on October 9.

Let us know about Marius Tabacu as General Manager. How would you define its mandate and how would you say that the institution has evolved over the years?

I would define it by one word - balanced; a mandate of a man who knew how to run an institution of almost 200 people such as the Transylvanian Philharmonic in silence, in discretion and listening to each and every opinion, what their position is in relation to all the things that have happened here. It's a huge loss for us, but we're moving on because that's the situation.

Let's talk about the concert that will take place at the Transylvania Philharmonic in Cluj Napoca.

The concert will be conducted by Gabriel Bebeșelea, our main conductor, who will be at the orchestra's rostrum and will have the soprano Oana Trâmbîtaş invited. The program mainly contains compositions that fit such a situation, compositions by Purcell, Mahler, Ravel, Faure, Beethoven. And, a final issue of this program is Siegfried`s Funeral March of Twilight of the Gods by Richard Wagner. It was not by chance that we chose this piece at the end of the concert, because Marius Tabacu, in the past years, in which we were able to make the first two compositions of Wagner's tetralogy, was the one who made an admirable translation of the two librettos and is somehow a tribute to him for this contribution that he made.

Speaking of this initiative that Mr Tabacu had, can you tell us if this project will continue?

It's hard to tell you at the moment, especially since the situation is so murky. We would have liked to continue, but we realized that with the last two pieces, the forces and efforts involved would have been even greater than they were in the first two, when we have exceeded our limits in every respect anyway and we are glad that we did so. We had intended at one point to move forward with the last two pieces, but for now the project has remained in suspension. Hopefully, maybe, at some point, we can get the tetralogy to an end.

How will the concert take place? With or without an audience?

The concert will take place without an audience, according to the regulations in force, but will be transmitted online from 7PM on the Facebook pages of the Transylvania Philharmonic, TVR Cluj and Radio România Muzical, to whom we also thank for their support and collaboration.