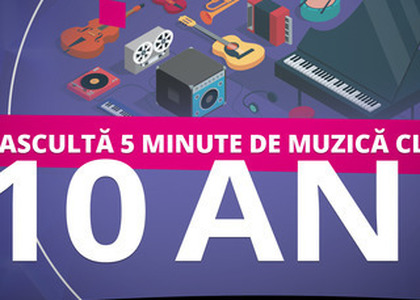 Mrs. Irina Stan, how important and useful do you think the "Listen to 5 minutes of classical music" project in schools is for students?

The "Listen to 5 minutes of classical music" project is an extremely important project for the harmonious development of children, because it helps us bring them, the direct beneficiaries of the project, namely the students, students of all grades, from the zero grade up to the 12th grade, and I could say that the pieces are recommended even to preschoolers, much closer to the goal we're trying to achieve in the Music class. The goal is to acquaint and to help them become friends with good quality music, especially since in this project, the pieces suggested by Radio Romania Music are extremely well-known pieces or parts of pieces known by many students, in special performances. That is why I believe that the project is a very welcomed one at the school level, and I think that all of my colleagues are on the same page with me when I say this.

How is this Radio Romania Music project received by the schools in the capital?

I'd say that the project is very well received, taking into account the fact that every year the number of schools enrollingis growing. Also, the number of students participating is increasing, given the number of participants, including at the contest that this project has, and I think that teachers in schools and not only, because there are many who signed up from kindergarten too, even if these children are too young to take part in the contest, have started to become aware of the importance of this project. I would also like to say that every time the school year starts and the project is back in the news, the children are extremely happy. Unfortunately, for some of them, the Music class is the only time they get to listen to such good music, with parents often not having the financial possibilities or time to take them to performances. So for us, as teachers, this projectand everything that is proposed to us as music pieces is a real help.

What feedback have you received from the teachers involved?

Most of them tell us they are delighted, both the teachers, because having such a big number of musical recordings, recordings that we as welllater find in the teacher's library or the student's library and that we can play in class, they are glad to be able to use good quality recordings, as well as the children, because every year, as we suggest many other pieces, practically they can enrich their general and musical knowledge that they improve over the course of four or eight years, when it continues up until high school.

I believe it will, as each one of us, those who teach, have been involved and we post, where children, for example, don't have the possibility to listen online, we post the pieces that the project proposes to us, and their feedback has always been an extremely good one. They are happy that they can listen and most often listen again,because there are certain musical pieces that the children like more, and then they wish to listen to them several more times, and if they only went online, they could only listen to them in that week. This way, they have the possibility to listen to them the next week and after two weeks, and I believe that the number of children will certainly increase, as it our role, the teacher's role, to educate them. The project helps us and that's why I think that every year the number of children will increase.