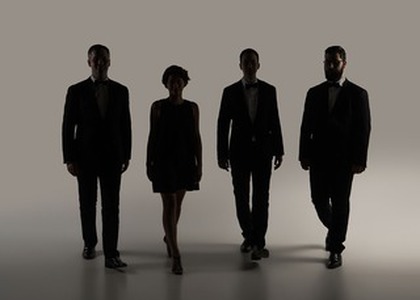 Interview with violinist Daniel Auner, member of the Auner Quartet

At Thalia Hall of the Sibiu Philharmonic two recitals take place, given by the Auner Quartet composed of violinists Daniel and Barbara Auner, violinist Nikita Gerkusov and cellist Konstantin Zelenin.

Firstly, we would like to know more about this ensemble.

The Auner Quartet is a Viennese quartet, founded eight years ago andcomposed of four musicians who met in Vienna, to study. We all come from different parts of the world- we have a violinist from Brazil, a cellist from Belarus and a Russian violinist, I was the only one born in Australia, although I have Romanian roots: Auner family comes from Sibiu, so I am happy to have the possibility to perform with the quartet in Romania for the first time. We are lucky to be supported by the National Bank of Austria and to have four valuable instruments made by masters such as Stradivari or Guadagnini, which is a privilege for us. The ensemble was also lucky to win important competitions dedicated to the chamber music, fact which enjoyed us; in the same way, we enjoy that although we are in the middle of a crisis, we can have beautiful concerts and moments of musical happiness on stage.

The Auner Quartet became Austria's cultural ambassador, as part of New Austrian Sound of Music program. What does this mean for a group of musicians?

The title of "music ambassador" offered by the Austrian is, of course, very prestigious and the competition for it is fierce- many portfolios are sent, from many ensembles or soloists from Austria, the competition is not limited to Austrian citizens, but to musicians living in the country. The commission is formed by university professors and directors of important universities, and the fact that we were elected by this commission to represent Austria was a great honor for us. More exactly, this title assumes that we are regularly invited to events organized by the various representatives of the Austrian Cultural Forum around the world. It is, in a way, a program that supports the young artists, giving them a "golden ticket", with which they can come in front of a diverse and large audience, having at the same time the opportunity to build a career, both through the relationships with impresarios, for example, and through the presence on the concert stages. Through this program, we have already sung in the United States of America, in South Africa, we will arrive in Japan but we have also been in Colombia, Mexico, Peru or Brazil, and from Europe we have visited all the countries, except Romania which is now on our list, which also includes countries such as Thailand or Indonesia; so, we have travelled a lot through this program of cultural ambassadors, and we are very grateful for the experience we have been able to gather and for the moments we have been able to share with our audience all over the world.

I understand that you have two concerts, with two different programs. How did you make this choice?

We wanted that everyone who wants to participate to have the opportunity, but because of the coronavirus, restrictions have been imposed all over the world; we know that the concert halls cannot be full, so we decided to split it into two concerts. To offer the public the option, we thought at two different programs which have a common work- the clarinet and strings Quintet by Wolfgang Amadeus Mozart. In the first recital, we have the String Quartet op. 18 no. 4 by Ludwig van Beethoven, written in Vienna, as result of a competition with Joseph Haydn; one of the most important dukes in the city at that time, Duke Lobkowitz, arranged a competition between the two composers- Joseph Haydn, mature, and Ludwig van Beethoven, the young come from Germany to live in Vienna. The duke asked the both to compose a cycle of six string quartets, to see which would be more interesting. Of these six signed by Beethoven, the String Quartet op. 18 no. 4 eventually became the most popular of the early Beethoven quartets. In the second recital, we will present another Quintet with Clarinet, this time signed by EgonWellesz, an Austrian composer who had to emigrate to England because of the fear of the National Socialist regime; he was one of the most sung composer in Vienna before the rise of the National Socialist regime. His music is intense and full of emotion, each of his work has a story to tell. It may not be as accessible as the Beethoven Quartet, but it is a very special piece; in fact, it will be the first audition of this work- it is the premiere of this Quintet because the score was not previously published, being composed in the '50s , 7 decades ago, but it will still be the premiere, which requires a lot of work, because there are mistakes in timing that we have to find, and there is no interpretive tradition of this piece, so we cannot listen to a recording of another ensemble to observe the tempos or even some notes about we are not sure what they should be. So, it's a lot of research, but it's fascinating and it's a good way to rediscover a forgotten music, which- in this situation- will enjoy the presentation on a remarkable stage.