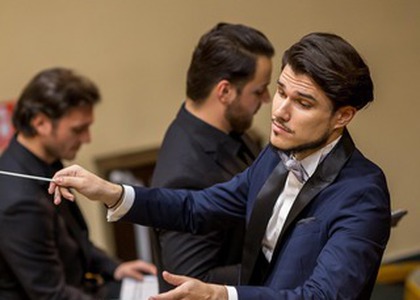 An interview with conductor Andrei Stănculescu

The young musician Andrei Stănculescu, conductor of the Choir of St. Joseph's Cathedral in Bucharest and master student in the conductive department at the National University of Music in the capital, is currently a participant of a course for young conductors where they study the music of baroque creators such as Rameau, Charpentier, but also, of a name less known to today's public, Orazio Benevoli. Liviu Pețu spoke to him last night, October 22, near midnight for the morning show at RRM.

Andrei, you are now in a wonderful place, located 30 km from Paris, in an old monastery. - akind of castle whose foundation stone was laid in the 13th century. First of all, it's a great place, I guess, if you take me by the pictures you sent me, an ideal place to do culture. And what is even more to be appreciated is the fact that there are still solutions found so that classical music won't stop its natural course even in times of pandemic, both in the country and in France. I understand that this week you are participating in an interactive course dedicated to young conductors, organized by a French private foundation called Royaumont, where you study, with conductor Léo Warynski and musicologist Louis Castelain, the music of some pre-classical creators.

First of all, I want to ask you what is the atmosphere like at L'abbaye de Royaumont?

The atmosphere is trully baroque. Everything around me looks old, old in the best sense. Everyone is extremely dedicated to finding solutions that are, historically, as close as possible to what was happening in 1600. The people here at the Royaumont Foundation have provided us with huge halls, so that we can bring to life these multi-choral works, in four choirs, works written by Orazio Benevoli, Marc-Antoine Charpentier and Rameau.

How did you come up with the idea to participate in this course?

Two years ago I collaborated with the conductor Léo Warynski in Paris, he being the coordinator of the "Playing for Philharmonie" project, launched in France by Societe Generale ...

When you sang with the BRD Choir, right?

Exactly. It was brought to Romania two years ago. We participated in this project with the BRD Choir and sang with the Societe Generale Choir from France, led by Léo Warynski, and another Societe Generale Choir from Senegal. That's when I met the conductor Léo Warynski and I was extremely excited about the way he worked with the choir and I really wanted to be able to work with him. I found this course on the internet and took the interview a year ago; I even learned French so that I could do a rehearsal.

Are you the only Romanian in this choir?

I'm actually the only foreigner, yes.

So, if I understood correctly, among the pre-classical creators you are studying this week is also present an almost unknown name to today's audience?

Orazio Benevoli or Benevolo, who lived in Rome, was the choirmaster of the Giulia Chapel in San Pietro. At that time, there were the two great chapels - the Sistine Chapel, which everyone knows, the pope's private chapel, and this Giulia Chapel, which was not a private chapel, but the chapel where ordinary people could participate in masses. This Orazio Benevoli was the conductor of the cathedral and wrote a special mass for the patron saint of San Pietro, for St. Peter's Day, a mass called Tu es Petrus; in this period, we all sing in Flemish Latin.

Therefore, along with Benevolo will be the music of Charpentier and Rameau. Tell me how the rehearsals go, how do you get along with the two members of the Royaumont Foundation, Léo Warynski and Louis Castelain who, from what I know, is a musicologist specializing in baroque music?

On the first day I had a course with Louis Castelain about French baroque music and baroque music in general, he being an extremely recognized musicologist in France. He is a publisher at the Center de Musique Baroque de Versailles - one of the largest institutions in the world in terms of baroque music - and he is also the conductor of his own ensemble, called Le Parnasse Francais. And, as a musicologist, he taught us how to get to the source, the manuscript, how to decipher a manuscript, how we should look at the proportions in which we choose the number of choristers when we approach a work and from the historical point of view and a lot of other extremely interesting things.

I am sure that it will be an absolutely impressive concert both due to the repertoire and the location. In the end, I would like to ask you how do you feel about this experience so far and if we, Radio Romania Muzical, will have the opportunity to have a copy of the concert that will take place on Sunday, October 25?

I will try my best to get Radio Romania Muzical to take possession of this recording, because the music of Benevoli, Charpentier and Rameau deserves to be heard in Romania in this version-vision of the two, Louis Castelain and Léo Warynski. I think this concert will be extremely interesting. It is the first time that this mass for four choirs written by Benevoli has been sung since 1600 and I am sure that the Romanian public will appreciate it very much.

Thank you, Andrei, for all the information and I'm glad that classical music, during this period, finds its place, even in an enclosed space like this old monastery which is like a beautiful castle near Paris.

I wish you all the best and I hope that the music of Benevoli and Charpentier can be heard as soon as possible on Radio Romania Muzical!