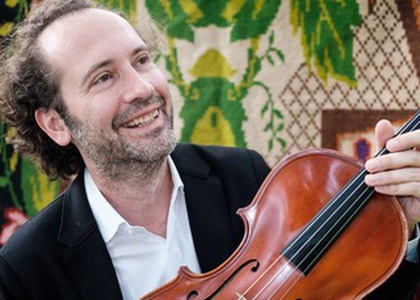 The 15th edition of the SoNoRo Festival, entitled "Master Bird"starts on October 31st. This series is dedicated to the Romanian sculptor Constantin Brâncuși, but it also honours Ludwig van Beethoven, as we celebrate two and a half centuries from his birth.

For starters, I would like you to explain the division of this edition of the SoNoRo Festival.

Organizing the 15-year anniversary edition of SoNoRo was more adventurous than we ever thought possible. For this reason, we had to be extremely flexible and inventive. After finding out about the problems that exist this month, we changed the geometry of the festival about five times and finally we decided to do now, in the first phase, the SoNoRo tournament, which will delight the audience only through live, online performances, more precisely in Brașov, Busteni and Sibiu and with a small preamble in Bucharest, and then between December 3-9, when we organize the main part of the festival in Bucharest and when we hope that the concert halls will be full of people again.

The first half starts, as you said, in Brasov and ends in Sibiu, on November 5th. Tell us a little about the artists who will be present at these events.

I am very happy to work with Diana Ketler, the artistic director of the festival, because she and I have been on the posters for 15 years. We have again the violinist Mihaela Martin, together with her husband, the Swedish cellist Frans Helmerson, then another well-known German musician, the violinist Allisa Margulis who returns to Bucharest during our concerts, Ionuț Bogdan Ștefănescu, with whom we filled with joy many courtyards and interior gardens in Transylvania this summer and who is another guest of the SoNoRo festival. Then the German cellist Justus Grimm and next to him we have the young Romanian violinist from Cluj, Francesco Ionașcu. So, a band of artists, I say, who could prepare all kinds of surprises for the public, this time, online.

I would like to focus a little on the program. It is stylistically heterogeneous, but the works are united by certain narrative vectors. What should the public know about the perhaps lesser-known works that can be heard in the coming days?

I think the audience simply has to sit in the armchair or on the couch, open a good bottle of wine and let themselves be carried on the wings of the birds that we will describe musically this week. I think the public already knows that the anniversary edition of SoNoRo is entitled "Master Bird" and I think you have seen that there are several lines that have guided us in organizing and choosing the program. On the one hand, the homage to our symbol, the SoNoRo bird, which has delighted so many people in these 15 years. So, they are inspired concerts, so to speak, from flight, from the air, from birds, so we have songs like "The Lark Ascending" by Ralph Vaughan Williams or songs that are inspired by the work of Constantin Brâncuși. Obviously, Brâncuși's"Master Bird" is an extraordinary source of inspiration and not only the "Master Bird", but also the other sculptures. You've probably seen that in the second part of the festival there are concerts called "The Table of Silence" ("Masa Tăcerii") or "The Sleeping Muse" ("Muzaadormită"), so this is somehow the second world we were inspired by, and then Ludwig van Beethoven's 250th birthday is a great joy for all. Even in this first phase of the festival, two concerts are dedicated to the great Beethoven: the first on Sunday, November 1st, in the splendid hall of the Cantacuzino Palace in Busteni, and the other on Thursday, November 5th, the preamble of the SoNoRo edition, which will take place in the residence of the German ambassador in Bucharest.

Like Bucharest, Brasov and Sibiu are currently in the red scenario. Assuming that it will not be possible to organize events with the public at the beginning of December. What will be your alternative?

I choose to stay optimistic. You know that you have to be flexible this year. So, first of all, let's trust that Bucharest will open up and we can certainly discuss this topic a week or two before. I am very confident that until then, Romania's cultural life will restart, because it must restart.