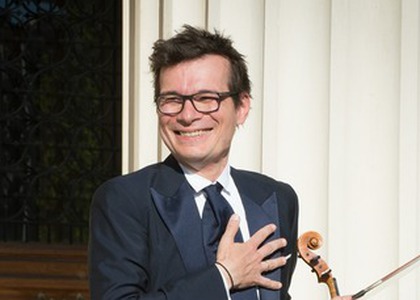 Interview with the violinist Alexandru Tomescu

A new album by Alexandru Tomescu appeared at Casa Radio Publishing House. Under the title "Concerto", the disc consists of recordings made with the National Radio Orchestra, in three different concerts, conducted by Cristian Măcelaru and Tiberiu Soare.

Let's start with the three tracks printed on this album. What attracted you to them, both individually and in the big picture?

I've always loved the classics and Mozart obviously is one of the test stones for any violinist. What is special to me about the songs on this album entitled "Concerto", is that these three works, Mozart's Concerto 2, The Violin and Orchestra Concerto by Antonin Dvorak and Introduction and Rondo Capriciosso by Camille Saint-Saëns are all recordings of the concert. A very important aspect for me, because often people seek, hunt, chase perfection, including in this very subjective field of ours, of musical interpretation. When making a studio recording it is possible, indeed, it is possible to achieve a slightly artificial perfection there, with a small Photoshop, it can get that lack of mistake that we all aspire to. But, you know what's happening? Along the way, the life, the life of the interpretation, the life of the music are lost, because an interpretation, is a work that is alive and has imperfections, and that's what it gives that life, that experience, that dose of unpredictability that life has in the flesh. I know that the Greek architects, when they were designing their temples which are an embodiment of the perfection of proportions deliberately, incorporated into the constructions, certain details that were not so perfect, precisely so that they would be perfect from their point of view. So, even if there is someone coughing in the hall or a rustle is heard when a page of someone in the orchestra is moved, there are some recordings that have life and keep that energy of the concert and that means very, very much to me.

So you thought of this disc as an embodiment of a Greek temple?

In a way. It's a live record. I had the privilege of working with two very big names of Romanian conductors, with Tiberiu Soare, with whom I was also a colleague before and with whom I am not at the first discography achievement and with the master Cristian Măcelaru, who is a name in full swing and that Grammy Award that he won this year, says a lot, I think. It is so important to feel free in the company of a conductor on stage and in their own personal way, each of them has managed to give me this feeling of freedom, of creativity. Somehow, when you have a suitable stage partner, it's kind of like a tango, the partner has to know how to anticipate what your next move will be, as in tango you need to know how to anticipate which foot the dancer will take, also in music is not just to connect, to breathe the music in the same way as your partner, you need to even be able to predict the unpredictable things that will happen and when these things happen it's absolutely wonderful.

You were talking earlier about the fact that it's an album made up of concert recordings. During this period many musicians chose the refuge of a recorded album in the studio. The choice to make an album from concert recordings was a deliberate one? Have you tried to avoid the mainstream?

Yes, I also made studio albums. It's also an interesting experience in its own way, but I realized at one point that what I'm looking for in these little bottles, no, that we're throwing into the temporal ocean, that basically a concert is very short in time. It's over. People remember it maybe, a month, a year, ten years if it was a memorable concert. At some point, inevitably, a concert falls into oblivion, whereas a compact disc is similar to those bottles, right? shipwrecked in the ocean waves with messages destined for others. And I realized that what is important to me is not so much this lifeless perfection, that precisely, finding those partners, and I am referring here to the stage partners as well as the partners in charge of making the recording. They're equally important for the final product, for the disc I mean, to understand what I'm looking for, what I want to get and let us work, let the music flow, let's not record like that, on microscopic pieces. Sure, put together turns into a puzzle that you know the image seen so high. But that life is lost. Life I think is the most important attribute, the emotion that this fluidity of music conveys, to be able to connect, these are among the most important features of a recording and often the studio recordings tend to become fragmented or fragmentary, and these things get lost. I remember listening at one point to a recording of Herbert von Karajan. He is, if you will, the father of successful classical music recordings, because he was the first artist to understand their long-term importance and I was very surprised to see that on a record considered by Karajan good, left to posterity, there were out-of-syncs between the orchestra's compartments. . But what a life that recording had, and it was precisely that little dissynchronization that gave it a tinge, a human touch, you were still waiting to resynchronize. There was a movement there, something was going on and Karajan was personally attending all the fonotecare sessions, so he got involved personally, left absolutely no detail to chance. So nothing is random in these records.

Although we are in a period of uncertainty, I wanted to know what your agenda looks like for the next period?

Together with the Radio Orchestras, we have already set the season, in an obvious optimistic tone, hoping that these concerts of ours will be able to take place with or without an audience. The important thing is to meet, to stay, to pass on this music. I will have concerts with both the National Radio Orchestra and the Radio Chamber Orchestra, now in November, in December, then a concert that I look forward to by Richard Strauss in the spring, then closing stages with the Chamber Orchestra, so there are many events. I try to plan the next concerts, the next tours with enough flexibility, so that they can take place according to the last-minute changes. If before, indeed, people were doing their stages for at least a year, two years before, now the key word has become flexibility, I have dedicated and I will devote an important time to pedagogical activities. This year I joined the faculty of music and theatre at the Western University of Timisoara. I already have six students with whom I started working and it's great to be able to build something for the long term. I've taught numerous times in masterclasses that lasts a week, ten days, but it's certainly something else to be able to follow the evolution, the development of a musician, over several years. They're very promising young people. A few of them are also interested in competitions, but I will prepare their complete package of information to know not only how to play very well, but also to be psychologically well prepared. So, there's going to be a lot of things. The important thing is that no matter where things go, we can live for music, be able to play this music, whether it's singing in front of an audience, because here it is, it became the ultimate luxury, or playing in front of a virtual audience. The message is the same.