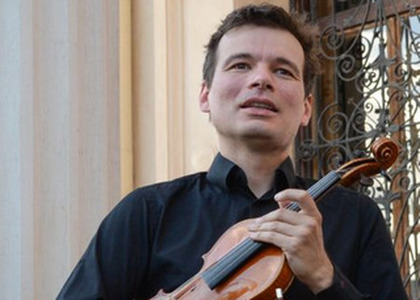 Interview with violinist AlexandruTomescu, the soloist of the November 4th concert at the Radio Hall

We learn more details about the concert's programme from violinist AlexandruTomescu, interviewed by FloricaJalbă:

You are returning on the stage at the Radio Hall during a very difficult period, for a live concert. Because of the pandemic, the concert that was supposed to open the Radio Chamber Orchestra's Season was cancelled, after having already been prepared. The following concert was also cancelled, and after that, there came a total pause for two weeks, imposed by the restrictions caused by the surge of infections in Bucharest. The concert planned for Wednesday will therefore be the one to open the Radio Chamber Orchestra's Season. How are the rehearsals going?

Very well. I'm very glad to have the opportunity to meet my colleagues again, all of whom I've missed so much. It's a great joy and pleasure to work alongside maestro Cristina Mandeal, and we are all obviously thrilled with the opportunity we have to perform the music we love so much, such a rare thing nowadays, in front of a virtual audience. I think that the Radio Orchestras have a very special advantage, which is that, along with these Facebook live streams, we can also broadcast our music by means of radio waves, and I believe we should take full advantage of this opening and opportunity, because, as it shows, during these strange times we are living in, music has to be flexible as well, it has to adapt.

We will listen to you perform the Violin Concerto No. 3 in G major, K. 216, for violin and orchestra, composed by Mozart when he was 19. In a top of the greatest violin and orchestra concertos, done by the London publication Gramophone, this piece is ranked at number one. What is your perspective on this concerto?

It wasn't chosenat random. It's a very animated, optimistic and energizing work. I have played it many times, and I know it very well, I've even recorded it with the Radio Chamber Orchestra, conducted by HoriaAndreescu, and it was included on the Simply Mozart album, edited by the Casa Radio publishing house. Therefore, I'm very attached to this piece in many ways, and I think you must play Mozart as long as you call yourself an artist.

What are the upcoming concerts in your schedule?

There are plenty of plans, I only hope we will be healthy, to be able to carry them out. What I've learned during this period, since spring, is that we can knowwith some degree of probability what we will do tomorrow, and maybe the day after tomorrow, but only God knows what we will do next week or next month. The concerts are scheduled, of course, the season at the Radio Orchestras is made at least a year in advance and, slowly, things are starting to turn back to some kind of normality in this domain as well. I have concerts scheduled for this year and the next season as well. My deepest wish is to be able to carry them out in front of an audience who can come relaxed and at ease to the concert, without the fear of contracting some virus. We are all waiting to escape this "Coronavirus" tunnel, and to come back to a cultural life that is as close to normal as possible.