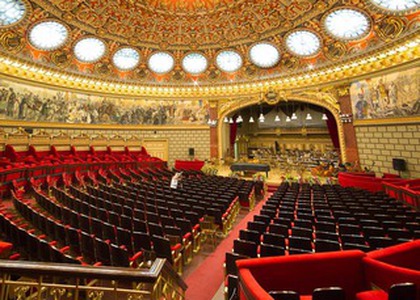 During these difficult times, the "George Enescu" Philharmonic managed to have some achievements - conductor and pianist Christian Zacharias has accepted, in April, the title of honorary director of the "George Enescu" Philharmonic, starting from the 2020-2021 season; another institutional distinction, "Artist in residence", has been launched in May, premiering in Romania, in order to attract the musicians of great value, and from the beginning of the pandemic caused by the COVID-19 virus recordings of some memorable concerts have been transmitted.

Today, from 12PM, in the Protocol Room of the Romanian Athenaeum, during a press conference there will be a discussion about all these things, the name of a new chief conductor of the "George Enescu" Philharmonic Orchestra will be announced, and a new project within the Beethoven Year will be discussed. We're slightly anticipating this conference at Radio Romania Muzical.

I would like to start with conductor Gabriel Bebeșelea. First of all, congratulations for your nomination as leading conductor of the "George Enescu" Philharmonic, together with master Christian Badea! Look how beautifully your activity in the country on the Cluj-București axis combines! When will you actually enter the role of main conductor and what projects did you think of in this quality?

Gabriel Bebeșelea:Good morning! It's a thing that honors me very much, because this nomination comes after a host of great musicians, and, at the same time, I believe it also makes me responsible, as we are dealing with quite difficult times, during which we must not stop the music; I think it's the main goal, as long as we manage to maintain the safety of the musicians and that of the people. I will have my first concert as a part of "George Enescu" Philharmonic season in January, when we hope things are heading towards some normalization at least from the public's presence point of view, if not from that of the widening of the orchestral apparatus. I believe that the following period, for all of us, is somehow the period in which we're trying to adapt to the new requirements and to the new rules, and again, with stopping the music. This thing is extraordinarily important for keeping our connection with the public and also for keeping this energy even on stage.

In any case, I suppose the concert which you are going to conduct in January will be broadcast online anyway, if the conditions of the pandemic don't change. Is the programme for January also outlined?

Gabriel Bebeșelea: We're still discussing it according to these new regulations that are being foreshadowed, but yes, we have a pretty clear idea. I have also presented some concepts, because my preoccupation now is mainly that whenever I'm building a programme, there should be a concept behind it, and all my works should be connected, even if not at a first look, even if not from a musical point of view, but at least ideationally there should be a red thread between them. And, somehow, I wish these concepts could be maintained in this situation as well. I trust that we will achieve this, but the schedule will be announced very soon, when we know exactly how things will evolve in January. And yes, the concerts are going to be presented at least online. I am actually pretty optimistic about the presence of the audience as long as, I repeat, there will be safety conditions for the musicians and for the public.

We are all optimistic! And now a question for Ion Bogdan Ștefănescu… I have read about a project in the Beethoven Year of the "George Enescu" Philharmonic in a press release. I understand that it is about a series of recordings. What can you tell us?

Ion Bogdan Ștefănescu:That's right. Firstly, I would like to congratulate our directors, Mr. Andrei Dimitriu and Mr. Ion Prunner for the initiatives they have had lately. Gabriel Bebeșelea is an exceptional acquisition for the philharmonic. In my opinion, he is a young musician, but at the same time extremely mature, with a well-defined career behind, and I think this is a great thing. Also, the fact that he accepted our proposal for this audacious project is an extraordinary thing, because we are thinking about realizing in this trio formula which I'm announcing here for the first time…

A trio and a flute, right? Violin, violoncello, piano and flute.

Ion Bogdan Ștefănescu:Exactly. We have basically set up a trio today. It will be announced in the press conference, Trio Affresco, together with Vlad Maistorovici- violin and Diana Ionescu - piano, who are both laureates of the "George Enescu" Festival, and who will also become artists in residence at the "George Enescu" Philharmonic on this occasion. This established trio will have, besides, the season we'll need to realize in this formula, but we will probably also have guests. And that's what happens with this project named Trio Affresco - the Beethoven Year. We are proposing an integral of Beethoven symphonies in Hummel's arrangement, an amazing arrangement that I, honestly, didn't know about. And this critical situation we're going through also has a…

I was just about to ask you who re-orchestrated Beethoven's symphonies for such a chamber ensemble. So, we're talking about all his nine symphonies, right?

Ion Bogdan Ștefănescu:From Symphony I to VII. The eighth and ninth symphonies are realized by Hummel, but in a more extended formula. The ones in quartet are truly spectacular though! We will have Ștefan Cazacu as a guest. He is joining us in this approach. A very young and very musical cellist, talented and with an impressive technique. And I hope that the cadence of these performances will be once in two weeks. So practically we have to prepare a symphony once in two weeks and a microrecital before the symphony.

Thank you both for your presence in Radio România Muzical's morning show! Good luck in realizing these projects!