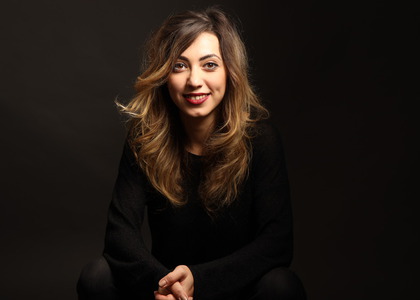 Irina Rădulescu–The Guest of the Week in Perpetuum mobile

Young artist, dedicated to percussion and especially to marimba, an instrument that already consecrated her, Irina Rădulescu- The Guest of the Week - brings to the Romanian public a series of novel short films, an incursion in the sonorous universe of a fascinating instrument. These films will be available to the public in a national premiere, beginning on the 11th of November until the 20th of November, at 7pm, on the Facebook page of Radio Romania Muzical and on the artist's Facebook page. We learnt more about the project "The Lesson of Marimba" from the percussionist Irina Rădulescu:

Glad to see you, Irina!

Good evening, Lucian! I'm glad to hear you and thank you for the invitation!

We're talking about the marimba lesson. It's the winning project of the Bratianu Scholarship, offered by The Ministry of Culture for the musical domain and I suggest starting our discussion from here, from this scholarship. How did everything ensue?

The marimba lesson is, first and foremost, a great joy and an honour because it is indeed the winner of this Bratianu Scholarship offered by The Ministry of Culture in September. And it probably started from my reluctance to move my artistic activity online. When the lockdown installed I was among the few artists who refused to do that and I said that I'll wait patiently for everything to pass so I could continue my activity the way I liked best, namely in front of the public.But obviously a lot of time has passed and I understood that that is no longer an option…

...unfortunately yes, for now. And then I put myself in a pretty uncomfortable position right from the beginning, that of creating an exclusively online project.

I'd like to make a quick résumé of your CV. You studied piano at the "DinuLipatti" National Arts College in Bucharest, and after that the percussion at the "George Enescu" National College of Music from the capital and you leaned towards marimba in particular. Why did you make a purpose from making this instrument as popular as possible?

Because in Romania, unfortunately, even though it's very well received every time and I'm glad to see that once they acknowledge it they won't give up on it and they come back to it every time, however it's not as popular and as appreciated as it deserves. Reason for which the marimba lesson, like any other project I come up with, represents nothing more than another brick on my behalf that I add to this reputation that I really hope marimba will get in Romania.

And we got to the marimba lesson -a project that you named, I quote, "an incursion in the sonorous universe of a fascinating instrument". How is this project structured and to who is it addressed?

The marimba lesson is a series of ten short films with an original screenplay, written by me as a matter of fact, whose purpose is the popularization of this instrument especially among children and young people. Now, even if I'm addressing to children, this mini-series is very well welcomed to the adult public as well. I thought that, besides children, there will be parents, grandparents, brothers, sisters. And from my personal experience with children, I've been working with them for a couple of years now, I can say that the way I get close to them and make them my friends is by suggesting them that us would be friends. I lean towards them as a friend and then we find ourselves somehow at the same level. They open up and the communication is very facile, reason for which I chose to use a friendly and playful language and sprinkled here and there with references to things that they now, of course - cartoons or their favourite games. But beyond this friendly way of speaking I still talk to them in a pretty serious manner, like I would with grown-ups.

It's probably a project that you had in mind for a while now. I say that because you already have didactic activity; you're a professor of percussion at the "George Enescu" National College of Music and I know you teach at the Nr. 1 School from the capital as well…

... during these times how are the percussion lessons held online?

Really hard, unfortunately, almost impossible. Of course that everything that means interaction between people is now hard in online. The education process is very hard under these conditions, but especially the vocational education, because on the instrument we count very much on these one on one meetings. And besides the fact that we don't meet, my students are the most disadvantaged because they don't have instruments at home; on one side, there are no financial resources for buying because the percussion instruments are very expensive, but even if we ignore this aspect it intervenes the problem of studying on these instruments, because you can't play a set of drums in an apartment. Therefore the children are deprived of the instruments that they study; some of them didn't play their instruments since March, when we entered the lockdown, and I'm really worried about the future of those who were going to make performance and of those who were already having results.

Let's stay on this matter, the times in which we find ourselves, and I'd like to talk about Legends. You said earlier that this project came as a result of your reluctance to switch to online. It was, after all, a tour - we talk about Legends - that you ended a month ago with the flutist MateiIoachimescu and the percussionist RăzvanFlorescu. You presented a program of contemporary pieces and rock transcriptions. I would like you to talk briefly about the way this project was received and if thePercussionescuduo is preparing anything for the near future?

There are always plans and there are so many because I'm the kind of person who as I'm working on something I imagine other future possibilities as well. Now I'd like to be reserved and not anticipate future projects because, as you can we, we can't know anything for sure, everything changes from one day to another. And I say that because what happened with the Legends project was a real trauma for me and my colleges, because we were working intensively on the project which was due to start in April, and it was obviously suspended, and that was followed by a period of agony for us, from April to when it really took place in September - a period of agony when every day existed the possibility for it to be cancelled for good. And of course, when it finally happened in September it was even more a happiness beyond words.

7p.m., as the other episodes will be. They will be posted until the 20th of November inclusively, an episode every day, at 7p.m., on both pages and possibly on The Ministry of Culture page as well.

Thank you very much for agreeing to this dialogue, I wish you the best of luck and I hope to see you again on stage as soon as possible, if everything goes well, if we'll get to the end of this period.

I'm so eager myself of course and I'd like to take this chance to thank once again The Ministry of Culture for offering the scholarship and for all the support they gave to us in the making of this project, as well as to the Radio Romania Muzical station for joining our project and for helping me making it known to a large public.