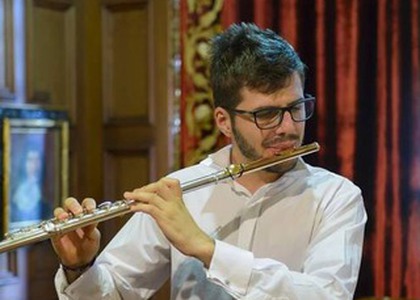 As part of the "Lipatti 100%" project, carried out by the "Ars Ventus" Association, the "V Coloris" quintet recorded the entire works for wind instruments signed by the Romanian composer.The band consists of Ștefan Diaconu on flute, Felicia Greciuc on oboe, Jonas Frølund on clarinet, Constantin Barcov on bassoon and Niklas Mouritsen on horn.

First of all, I would like to know, how do you see the works dedicated to Dinu Lipatti wind instruments?

The first time I came in contact with Dinu Lipatti was when I was a bachelor's student in Bucharest and I heard the song Introduction and Allegro for solo flute, sung by my colleagues. I studied it a little. I liked it very much, only I didn't have the heart then to go deeper into it, maybe also because the score didn't look very good and there were not many recordings. The next time I had contact with Lipatti's music, it was the first time I sang the song Aubade for wind quartet, with Valentin Ghita, through the Ars Ventus Association, which organized concerts with Dinu Lipatti. It seemed like an extraordinary piece, the same reason that made me a little reluctant was the poor quality score, but that didn't stop us from resuming it together with the quintet we had in Bucharest. I had a recital at the Small Hall and sang Aubade there. Lipatti's music for wind instruments occupies a very special place, because it can be easily put together with the most important works of the early twentieth century. His creation for wind instruments has a very important place and not only from a historical point of view or as research or just to say that Lipatti wrote something important, but from a practical point of view and from the point of view of the reception of these works by the public.

Tell us, please, what other works are included in this Lipatti integral?

The two works I mentioned, I insisted on them because they are the most important compositions for wind instruments. There is another song that we edited and recorded, I think, for the first time, I don't know if it has ever been sung before. It's a beginning piece, which he wrote when he was 19 years old Allegro for clarinet and bassoon, very short, it's a minute and a half, but it's a very funny and very interesting and very difficult piece, both for clarinet and for bassoon. From the research I did, it seems that this was a kind of exercise, which Lipatti did. Studying at that time in the class of Nadia Boulanger, in Paris, she requested many small compositions for various ensembles and various instruments. In addition to these three complete original compositions, there are two other works that represent transcripts of Domenico Scarlatti's sonatas. The first, made for the wind quintet. It has a pretty interesting history. Initially it started with two sonatas written for wind quintet, which were added and finally reached six sonatas, which, to the best of our knowledge, were awarded in Bucharest, even on Radio Romania, in the presence of Dinu Lipatti, who conducted his only concert as a conductor. He conducted the quintet, singing these sonatas. It was without an audience, it was on the Radio, so I think it's similar to the conditions of this period that we live in. Of these six sonatas, he transcribed two for the rehearsal trio for oboe, clarinet and bassoon and to which he added another different sonata, around 1939, I think, for the Brussels trio of reeds. These are completely all the works we have from Lipatti for wind instruments and, of course, there is another beginning of a quintet, which he did not finish and it is far too short to be considered a beginning of a work that can be finished. We included it in the score for the purpose of research and historical reason, but we did not record them.

When and where will the recordings be available?

The recordings will be available starting this week. I think that by the end of the week the process will be done on all audio platforms, such as Spotify, Itunes, Apple Music.