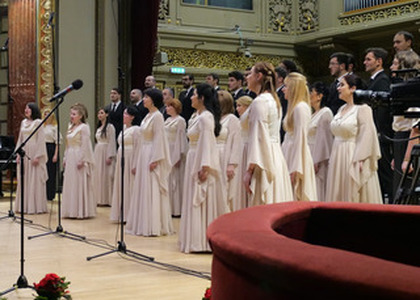 On Thurday November 19th, 2020, the anniversary concert of Corul de Cameră will take place without public. The operating ensemble within Centrului Național de Artă Tinerimea Română celebrated, at the beginning of this month, 48 years of existance. The recording of this concert willbebroadcast on Friday, November 20, on the website of Centrului Național de Artă Tinerimea Română and also on its Facebook page. Radio România Muzical will take over the recording on its own Facebook page.

Regarding the anniversary concert, we will find out more details from Voicu Enăchescu, the founder and conductor of Corul de Cameră Preludiu.

November 1st marked the 48th anniversary of the first concert given by Corul de Cameră Preludiu. How do you see the anniversary in this so hard year?

Well, how could I?! This year, I look at it with great concern and nostalgia, so out of the ordinary, because 48 years ago we lived a different life. We were not afraid to get out of our houses. And this activity that I embraced from those years was much more taken into account. The cultural-artistic activity was a place of honor in the Romanian society of those years.

Usually, on November 1st, a concert would have taken place to mark the anniversary. Given the restrictions caused by the pandemic, this thing was not possible this year. What did you manage to organize?

There was no possibilityon the 1st. We are organizing a concert that we hope to be received with pleasure. It will be a concert at Centrului Național de Artă Tinerimea Română which marks this number, not to mention anniversary.

Works from classical, universal and Romanian choral literature, from all times.

What are your plans for the next period?

We cannot afford to have plans in the conditions in which we live. So, it's a period without plans, with grievances. Plans…it is too much said.

To be able to continue our activity.That is the number 1 grievance. Not have restrictions of any kind, to be able to do concerts outside, in the halls and everywhere.

Do you constantly keep your rehearsals now?

Twice a week, restricted, on Mondays and Thursdays, so as not to forget everything that has been learned over the years, 48 years since CorulPreludiu has been operating. I am an optimistic, I was born and I am probably going to die optimistic, but… I'm overwhelmed.