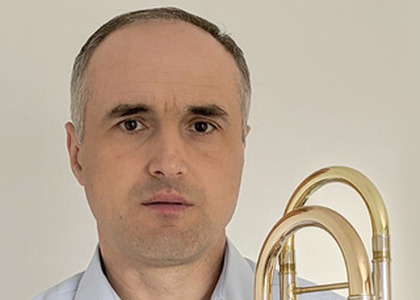 On Sunday, November 15, the next concert of the Florescu, Fernandez and Friends season will take place. The brass quintet composed of trumpeters Medve Sandor and Dumitru Trocin, horn player Alin Ștefan Roman, trombonist Ion Palagniuc and Ianța Gheorghe Simion on the tuba will go on stage in the Hall of Mirrors of the German Forum in Sibiu.

This is not the first time when you are participating in the Florescu-Fernandez & Friends season. How was your first experience?

Indeed, this is not the first time, it is the second time. The first time was at the beginning of the year, when I played together with them. It was back in February when we played in a concert together with a well-known violinist of Asian origin, Cristie-Su, who came from Belgium. She was actually the protagonist; I only played two songs in the concert, accompanied by Monica Florescu.

Please tell us about the brass quintet that you are a part of. How was it formed and who are your colleagues?

The brass quintet is newly founded, as all my colleagues are new. Our orchestra was rejuvenated several years ago, and I am the only one who stayed from those who have played before. Every year in Sibiu The Days of Romanian-American music are organized, after the closing of the season, and musicians with whom we used to collaborate came every summer from abroad, especially from the United States. And many editions we played in a quintet with an exceptional trumpeter from Alabama, John McElroy, and with our colleagues too… horn players came too, we always played together at this event. This year it wasn't organized and we were left with this longing to sing in a quintet. Then we have decided to make our own quintet, to sing. The other members are graduates from the academies in Cluj and Bucharest. On the trumpet we have Medve Sandor and Dumitru Trocin, on the horn is Alin Roman, on the tuba is Simion Ianța, and I'm on the trombone. I am full of enthusiasm, full of desire to play and this is a great thing. It is the first concert that we play together and we hope everything goes very well and the audience likes it.

What are the works that the public will be able to enjoy?

The concert will have two parts. During the first part we will play baroque and classical music, and the second part will be composed of songs of different musical genres, especially music by composers from North and South America. There will be tangos, film music, a march, a dixieland. Between the songs I will make a short presentation of the composer and I will say something about the song.