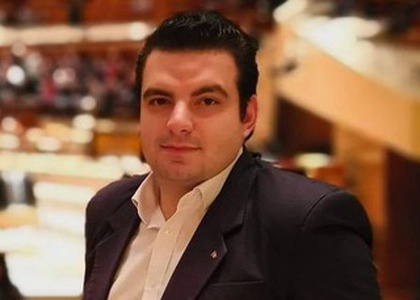 Interview with Vlad Mateescu about the Ploiești Jazz Festival

The Ploieti Jazz Festival organized by the Paul Constantinescu Philharmonic will take place between November 25th-29th, 2020. Among the guests of this edition are the pianist Mircea Tiberian, the sax player Ctlin Milea, the trumpeter Sebastian Burneci and the conductor Sabin Putza. The festival can be watched online on the philharmonics website and on social networks.

The Ploieti Jazz Festival is the first festival of this type that has ever been organized in Romania. As we can see, after 14 editions, the 15th one, which is inevitably affected by the current situation, will take place without an audience. Mr. Vlad Mateescu, was it difficult to find solutions regarding the organization of this years edition?

I must tell you that it was difficult only to a certain extent, because two or three years ago we wanted to create an online platform for the concerts and performances organized by the Ploieti philharmonic, so basically we had all these things related to online transmission somehow planned in advance. Therefore, from this point of view the pandemic caught us relatively prepared. It is also true that we cant and dont want to focus only on the online. Last year we grandly and successfully celebrated 50 years of jazz in Romania. We had no fewer than eight Grammy winners on the Ploieti philharmonics stage, in the Ion Baciu hall, an event that took place, like this year, under the aegis of the Ministry of Culture and under the auspices of the royal family. So we wanted this very, very much even though during these times, except for some symphonic concerts, who are occasionally held through the country, I dont know if there is any other festival, or at least one that is transmitted live. We actually wanted to have the bands on the stage and, of course we took all the necessary precautions because we wanted to hold this event in order to keep the flame burning, so to say, to have continuity, to maintain the tradition even during these challenging times for all of us.

On the list of invited artists there are only Romanian names, such as the pianist Mircea Tiberian, the sax player Ctlin Milea, the trumpeter Sebastian Burneci, the vocalist Luiza Zan, the conductor Sabin Putza and so on. Are there foreign musicians who couldnt participate this year because of the pandemic?

That goes without saying. Like every year, after the festival, in December, we already start preparing for the next years festival. I believe we had four or five line-up formulas for this festival, but of course they were changed every month. Weve always wanted to have a balance with regard to the festivals guests, in the sense that at least half of them should be Romanians, and the others should be foreigners from all over the world. This year has been a challenge for us, given that there are many Romanian artists, many good jazz musicians from Romania who maybe arent so well-known, and we were happy to see that everything thats local, everything thats purely Romanian can be done at another qualitative level and our public will certainly be pleasantly surprised even in the virtual environment.

The festival starts tomorrow, November 25th and ends on November 29th. Apart from the things that you mentioned previously, what would be the distinctive note of this years edition?

The distinctive note of this years edition is for sure this platform called virtual concert hall. Its a platform similar to digital concert hall app Berliner Philharmoniker, only that its adapted for Romania and for the Ploieti philharmonic, in the sense that we have a symphony orchestra, a folk orchestra, a jazz section in a trio - Ploieti jazz trio. That would be the special note of the whole festival, because we also had a live transmission last year, but now its 100% live on the Internet. We focused very much on the visual quality, on the image quality (although the event will be broadcast on social networks too, only on the sound side, sending it to our platform). It will be a 4K transmission, and the sound will also be of a very high quality. Besides the festival itself, we have a preamble, as in the previous years. Although the festival lasts for only five days, there is a whole holiday in Ploieti,and for three weeks the city is transforming, as we like to say, in a world capital of jazz.