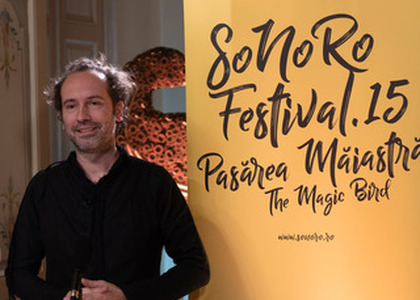 Interview with Răzvan Popovici, director of the SoNoRo Festival

15 years of SoNoRo events have been celebrated this year, celebrated with an anniversary edition inspired by the Master Bird of Brâncuși. Violist Răzvan Popovici, the executive director of the Festival, spoke about the conclusions of the edition in the following interview.

The 15th anniversary of the SoNoRo Festival has recently ended - an atypical anniversary, given the restrictions imposed on the background of the pandemic. How did the organizing process go, in these conditions?

It was probably the most complicated organization in these 15 years, but as we know that the French expression noblesse oblige is extremely important in any kind of organization and in any kind of long-term approach, we thought we could not we do not hold this anniversary edition. With great efforts, it is true, on behalf of our team, obviously, on my part, on the part of the artistic director, Diana Kettler and the artists who, in the end, all arrived in the country, we managed to set up an edition unforgettable. We changed the architecture of the festival seven times, trying to make the concerts with the public possible. In the end it was not possible, so we decided to hold the concerts via live online broadcasts, and, finally, look, we have reached the end of this edition. There were two and a half weeks of concerts, if we consider the two periods in which the festival took place. We had an extremely large audience that watched us. Only on our account and on the account of the partners, Vodafone and Raiffeisen, there were 20,000 views, and in the Facebook account there were over 80,000. What can I say, a great joy that I was able to bring music to so many living rooms, lounges and many people.

How did you adapt to the situation of supporting online concerts? Did you feel the absence of the public?

For me they were the first concerts sung without an audience and I have to confess that when you are in the spotlight and you obviously have the listening team, the cameramen, so the crew that filmed and you know there are tens, hundreds, long-term thousands of people behind the screens and behind the cameras, I didn't feel much difference. Obviously, when you are in the concert hall, with countless audiences, you probably feel a vibration and you can sing, somehow, so that you react as the audience reacts. But, I was also talking to the other musicians, there were simply some concerts that made us, the musicians, not feel different, being both excited, and excited, and happy. Anyway, that SoNoRo happened is a miracle and we were all convinced and we felt privileged to be in this moment, now, at the beginning of December, probably one of the very few festivals that took place in Europe.

What are your impressions now, at the end of the festival?

Personally, I am extremely happy that I crowned 15 years of SoNoRo adventure and obviously, this paradoxical year, with a successful SoNoRo edition. I was very happy that the theme Master Bird, Magic bird was a great success. The inspiration taken from Brâncuși's work and obviously the celebration of Ludwig van Beethoven 250 years after his birth, the homage to our sonorous bird, our mascot and our symbol, all led, I say, to a joy and delight of those who took part.