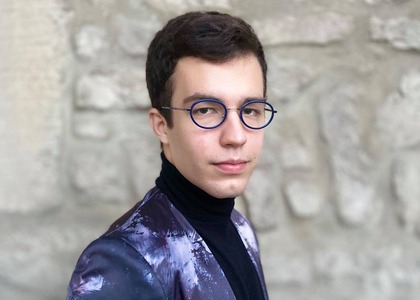 Interview with the pianist Ştefan Vârtejaru

The young pianist tefanVrtejarureturns to the Romanian Athenaeum with a recital which will be held without audience in the concert hall. The event will take place on Tuesday, the 12th of January 2021, at 7 p.m., in the small hall of the Athenaeum, and broadcasted online on the platform of the institution. tefanVrtejaruwill perform the Sonata in A major, D 664 by Franz Schubert, Sonatine in F-sharp minor by Maurice Ravel, Prelude, Choral, Toccata by Sigismund Todu, as well as the Out of Doors Suite, Sz. 81 byBlaBartk.

How do you see the comeback for a recital within the Tuesday night Season at the Romanian Athenaeum and the fact that this time the audience will be missing from the concert hall, the recital being available exclusively online?

Im honored by this invitation. Its always a great joy to play at the Athenaeum and to come back to the Tuesday night Season. This time yes, I wont have direct contact with the audience, thats a novelty to me, but theres a good side too, namely that more people will see me. I followed too recitals of the online season and Ive seen that there were sometimes even a thousand viewers; which is a really good thing, because this way we can have a much larger audience, even if only virtually.

The program includes romantic music, impressionist music and Romanian music. What were the selection criteria?

We structured the program as a dialogue between lyric and rough, between intimate and exuberant. I thought to open with the Sonata in A major by Shubert because thats a piece of an absolutely seductive musicality; its followed by the Sonatine of Maurice Ravel a tender, serene music which represents a transition to the second part of the recital, which is governed by folklore. The Transylvanian folklore in Prelude, Choral and Toccata by Sigismund Todu, which is probably the opposite magnum of his pianistic work and a piece of work rarely listened in public; after that we have the folklore from Szabadban, the Out of Doors Suite by BlaBartk, which continues somehow the folkloric language from Todu, erasing however every trace of musicality from it, the expression being a rough one, based on the reproducing of some feelings and images. Thats how I conceived the recital, as a dialogue between lyric and in the second part rough and folkloric.

Youre a scholarship student of the Normal Music School of Paris Alfred Cortot and a student in the last year at the Gheorghe Dima National Music Academy from Cluj-Napoca. However, you find time for a particular passion the promotion of Romanian music, as well as the organization of some interesting projects. What are you planning for this year?

Thank you for mentioning this. Yes, Im very passionate about promoting the Romanian music and promoting forgotten by history music in general. The most important thing for me is to tackle a repertory as vast as possible, in order to discover works that the public may not know that well. This year I want to organize a Romanian music festival. Ive already spoken to some artists who turned out to be very receptive and who want to participate both from Romania and abroad and, in addition, I want to launch an online platform called ROvival, a revival of Romanian music, in which to bring Romanian music in the Romanian forefront and then, why not, foreign music.

Can we reveal already some of the names of the involved musicians?

I received confirmation from Karen Su, whos a young violinist studying in Belgium and who won the Lipizer Violin Contest last year; then tefanMacovei, my colleague from Cluj, whos a pianist in the 4th year, and other three or four names.