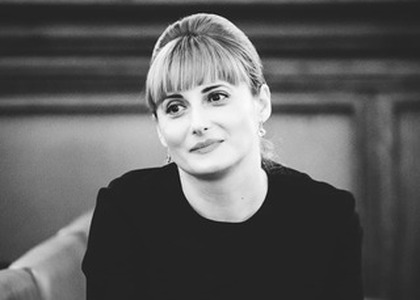 Interview with Geanina Simion, PR and image specialist at the Transylvania Philharmonic from Cluj-Napoca

The High Classic Transylvania project wants to combine music and history within an evening of videos that shed light on the Transylvanian cultural patrimony. More details we find out from GeaninaSimion, PR and image specialist at the Cluj-Napoca Philharmonic and chief of the Musical education department and public relations at the National History Museum of Transylvania.

How did you end up associating the two elements that form the High Classic Transylvania project, music and history?

Many times, the situations in which we find ourselves, on the edge of the cliff, so to say, make us more creative and make us find solutions. The exact same thing happened in this case, the moment the crisis came and the philharmonic couldn't hold concerts and the museums couldn't receive visitors, they had to come up with other projects. We were thinking of a joint venture between the National History Museum of Transylvania and the State Philharmonic of Transylvania. It was an ample project in which the Philharmonic found the opportunity of performing in areas in which it was allowed, outdoor, and the National History Museum of Transylvania found an ingenious way of promoting the cultural patrimony of Transylvania, in other ways than through history or telling the story of the respective castle and ruins.Therefore this High Classic Transylvania has been born, because light was shed on the castles in Transylvania, especially on the ones from ValeaSomesului and religious edifices which were related to aristocracy, because the majority of these medieval religious edifices were built through the sponsorships of noblemen or on their domains. In the end, everything came together as a series, each episode was dedicated to a cultural edifice and each episode has its own particularity. It's very interesting how none resembles the other, none is boring, including the musical register which is very diverse. Each episode brings you in the middle of the respective period, in its perfume. We began with the Teleki hunting castle from Luna de Jos. This castle doesn't exist anymore, only the hunting tower. We combined the history of this castle with a hunting repertory of the horn men from the Transylvania State Orchestra. Then the second episode was dedicated to the Reformate Church from Nima, an ancient medieval church.We went on with a religious repertory, performed by the Transylvanian State Philharmonic. The next episode will be broadcasted on the 2nd of February. It's about the Koenis castle from Manastirea, where we combined the story of this castle with a brass repertory of the Transylvanian State Philharmonic. We try, somehow, to give them the importance they should get.

We assume that the organization of the project wasn't easy. How did this process go?

We had a very prepared team from the Transylvanian National Museum, respectively medieval history specialists, as well as from the Transylvanian State Philharmonic, from the administrative sector, plus the artists that were coopted for this project. The medieval history specialist from the National History Museum from Transylvania, Csok Zsolt, came up with a list of propositions regarding the edifices we should include. We tried, based on all information, to create repertories. Therefore, this information went to the musical secretary from the Transylvanian State Philharmonic, OanaAndreica, who, alongside the colleagues from the choir and orchestra, created repertories for each of these edifices. The videos and recordings were organized throughout the summer and we started assembling them in autumn, the first episode being broadcasted on New Year's Day, and after that we concluded that the broadcasting day would be Tuesday, at 8 p.m., every other week.

Regarding the times we are going through, there are voices that say that the vaccination is the solution to get back in the concert halls. Where do you stand from this point of view? Will you get vaccinated?

I think that everybody has the right to decide for themselves, according to their particular situation. I think it's, practically, the first step we should make towards a relaxation. I think nobody realizes how fast this pandemic will end after vaccination. It is, at least, a solution we can try for things to get back to normal.