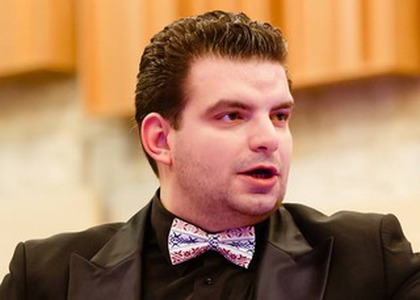 Interview with the director of the Ploiesti Philharmonic, Vlad Mateescu

At the beginning of next month, we will mark a year from the first restrictions imposed by the current pandemic. We learn more about the effects of the last twelve months on the institution he leads, but also about the solutions for them from the director of the Ploiești Philharmonic, Vlad Mateescu

For starters, I would like to return to the beginning of this year and the first reactions. What was your reaction and what was the perception of the musicians?

It was at least provocative, because, in the end, we ended this season or we interrupted the season with a concert, we say, colossal, because it was the first self-directed DVD release, a DVD that the Ploiești Philharmonic made from own resources. I am referring here to the symphony orchestra, the choir and all the technical staff, including everything related to filming and production. The release of the Carmina Burana DVD was on the 6th of March. Immediately after that, we closed, as everyone knows, that it was a state of emergency. I repeat, it was a challenge, but somehow, this period did not catch us unprepared. In the meantime, we managed to launch a new platform of the Ploiești Philharmonic, called Virtual Concert Hall, a unique platform in Romania at the moment, a platform through which any form of cultural institution of this profile, of course we are talking about philharmonics, theaters, operas, operettas, etc. they can use it, including to broadcast their concerts, shows, events, but also to monetize, which, on other platforms, social networks or all kinds of channels, at this time could not.

If a year or two ago, online concerts were either an exception or a neglected one, in the context of the pandemic, the necessary infrastructure was adopted by cultural institutions, and online events became the norm. Do you think that internet broadcasting will remain an option or will it remain an option for the Ploiești Philharmonic?

Definitely yes. As long as at the level of our institution not only the symphony orchestra is active, we also talk about the folk orchestra Flacăra Prahova, about the jazz trio, our jazz department, about the Cronos quartet, several bands. I'm not talking about the other collaborations or educational events we do, festivals and so on. I don't want it to be understood that we want to move completely online. We put a lot of emphasis on human interaction, we put a lot of emphasis on the feeling that both artists and the public feel and feel, after all, when they are in the performance hall. We just want the online part to be something adjacent, to be something that adds value, both in terms of image, including sound and quality, of course.

How great was the success of this platform? How would you say it was perceived by the public?

I want to tell you that at the moment, when we can return to the concert hall, even if the concert hall, at the moment it is sold-out for all the events we organize, even if it is with 50% capacity, we have increased the number of events in such a way that we could satisfy the wishes of the audience, which was extraordinarily desirable and really missed returning to the concert hall.Still, those who are online seem to be paying for virtual tickets to be with us. It's true, we are talking about hundreds, at the moment, we are not talking about thousands yet, but I have great confidence, because what has happened lately, in the last year, even if, I repeat, frustrating, difficult, challenging for us everyone, I am very confident that this move in the online environment of all services, in the end, can only bring added value and in this way I think that the performances of Romanian orchestras will increase a lot, because it is clear, we are not the only ones who went online, maybe the only ones who had this platform, but the Romanian public, having access to so many concerts online, having access to so many shows, automatically, will be able to make a difference, will be able to they really choose what they want to hear and from whom to listen. A challenge that attracts another long-term challenge.