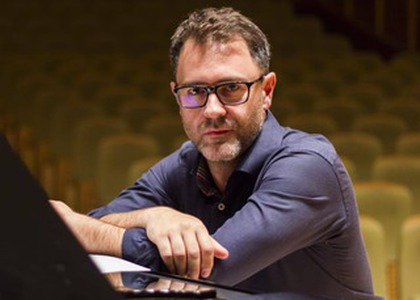 First of all, I would like you to tell us about the connection you are trying to emphasize through this event, the one between the chosen works and the creation of Constantin Brâncuși.

We approached a very modern repertoire. In fact, it's contemporary Romanian music. Thus, the modernity of thought, the modernity of the vision, the modernity of Constantin Brâncuși's creation is mirrored very well in the chosen repertoire. All the more so, since some of the works that I have included in this virtual playlist, I would say, are even works dedicated to Brâncuși's creation, are inspired by his works, bear titles of Brâncuși's works. These are creations that are called Princess X or Blonde Black, so the relationship with the great sculptor's creation is direct. The repertoire consists only of creations by composers, who are not only alive, but we have had the privilege of knowing them and working personally. The idea of contemporaryity is fully reflected in our program. These are creations by Adrian Iorgulescu, by Ulpiu Vlad, Roman Vlad, Violeta Dinescu, Felicia Donceanu, Remus Georgescu and Vlad Răzvan Baciu. A collection of works, which we love very much, which we have played quite a lot lately and which the audience has particularly appreciated.

I'd like to know what the process you're going through for such a video. I assume it's hours of assembly.

That's the way it is. We tried to adapt. In fact, this idea, this concept of virtual recital, is an adaptation to the current conditions, not only to the restrictive social conditions, namely, the fact that we can very hard to sing with the public, it is good that we manage to do this lately, but still, it is quite difficult, the conditions are difficult, the public is little, so we are not just talking about the restrictive conditions , but also the conditions that support us, which help us and I refer here to the technical availability. There are very good technical availability at the moment, in order to make the closest possible connection with the public. We tried to reinvent this idea of online recital, because placing some cameras and some microphones and performing live streaming is a very difficult thing and also, with a result, let's call it, little appreciated by the audience, because to stand in front of a screen and watch the same image for an hour is not so attractive , but to be able to give the audience some kind of a disc, but the release of a series of videos, I think it's an idea that might be appreciated. We thought we would do this in this time and on this occasion. So there will be a series of eight videos, which, as I said, we recorded in special sessions, over the course of a few months and in very, very beautiful places, with very rich artistic content. There are recordings made only in art museums or in historic buildings in Romania. So we go back to the relationship with the creation of Constantin Brâncuși.