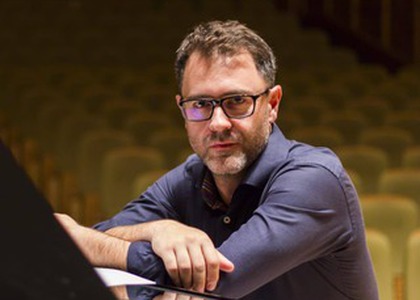 In the first week of March the project "The Ladies of Romanian Music" initiated by the pianist Ștefan Doniga and the violinist Diana Jipa, comes back under the name "The Ladies of Music". The project is dedicated to the prestigious female characters from the Romanian and universal musical creation. The audience will be able to enjoy daily an audio-video material recorded by the Doniga-Jipa duo especially for this project.

Mr. Ștefan Doniga, in 2019 you unfolded the project "The Ladies of Romanian Music" which included the launch of a CD with the same title. This year this project comes back under the name "The Ladies of Music". The title of the project could be inspired both by the female characters from the universal creation and the female composers that proved themselves throughout the years. What is that about?

Without doubt, we count on the repertory that we recorded a year and a half ago in thestudio of Romanian Radio Broadcasting "MihailJora" for that disc. However, what we want to do now is to celebrate the feminine presence from the Romanian and universal culture. It's the first week of spring; we begin right on the day of Mărțișor and until the 8th of March. Therefore, yes, we begin with the repertory recorded then which is very dear and familiar to us, but this one is a very different project, it's a project dedicated to women and dedicated to this beautiful celebration of evocation and of the spring beginning.

Besides the work you kept from the anterior project, how did you make the selection of the new works you introduced in the program?

We wanted that alongside the works of Romanian female composers - therefore there will be works signed by female composers only - to evoke also famous female characters both from the universal culture and universal music. Therefore we included very well-known pages because, indeed, we want to come up with a very accessible project, addressed to a large category of people, with a public as numerous as it can be.We chose The Meditation from the work Thais by Jules Massenet -therefore the evocation of this female character - as well as the well-known instrumental variations and reinterpretations series signed by Pablo de Sarasateafter themes from the work Carmen de Bizet -yet again, a well-known work from the universal violin repertory, very appreciated and which evokes a famous female character.We came closer to this universe of femininity, as I was saying, in the virtue of these beautiful thoughts of spring beginning. The selection, however, is not dated now; it's from a year and a half ago, from when we realized that CD and we came closer to the feminine Romanian musical creation literally through the lenses of its value. There are very, very good and very beautiful works. They're works that are certainly appreciated by a very large public. Therefore, reasons of joy for us and for the public if they choose to watch this project of ours!

The previous project, "The Ladies of Romanian Music", was realized in collaboration with the violinist Diana Jipa. Do you have in plan a new CD launch together this year?

We constantly want to do that. We have a project for 2021, it's called Romania Europolis, a project in which we want to show the beauty of this ethnic and cultural kaleidoscope that is the Romanian culture and in which we want to include works of some Romanian composers, but every one of them of a different ethnicity. Because, alongside George Enescu andCiprianPorumbescu, we still haveMihailJora, which is Armenian, HildaJerea - Jewish, we haveBela Bartok, very tight to the Romanian culture, Alfonso Castaldi, Theodor Rogalski… there are very, very many composers of other ethnicities that enriched and ennobled the Romanian culture. Therefore, this is our project for 2021, the launching of this CD. However the current series of videos we want to make, "The Ladies of Music", is in collaboration with the extraordinary violinist Diana Jipa too.

How will our listeners and the public be able to enjoy this new project, "The Ladies of Music"?

It will be a true marathon in the note of what we've initiated two weeks ago, when we celebrated the Day of Brâncuși, and specifically the concept called virtual recital. Every day, in the interval March 1st-7th, at 6 p.m., we'll launch a video online - on our Facebook pages, on our partner's pages, among which we proudly include Radio RomâniaMuzical, and there the public will be able to watch, from 6 p.m.of each day, a video realized on the music of Romanian female composers or about famous female characters. There are videos filmed throughout last year and in the first month of this year which we want to put together under this concept I was telling you about. Because if the public's access in the spectacle hall is still very unlikely at this moment and even if it's probable, the number of seats would still be limited, we chose to address a public as numerous as possible. And if we're able to do this thing through technology, we want to use this technologic potential as much as we can, that meaning not only to realize a static virtual recital, an online recital, the way it would be with the public in a concert hall, who sits comfortably in a chair and listens from a single point of view an entire recital. We're inviting the public on a true journey, to a cultural tourism, to a more ample experience than the one of listener, watcher, traveler and visitor at museums. Each piece we present, each video is filmed from different angles, in other conditions and in other places. And if in the case of the project "The Sound of Forms" dedicated toBrâncuși, we came closer to the artistic spirit of the great sculptor and realized all the recordings in art museums, now we'll travel to places from the most "exotic" ones. That meaning we'll play in botanic gardens and greenhouses, in the space of the Biologic research center Jibou which is absolutely wonderful. We'll play in the Retezat National Park, somewhere at almost 200m altitude - there are some gorgeous recordings which we took last year and the music is recorded live. We manage this significant technological victory. We will be on the stage of the "Ion Dumitrescu" Philharmonic from RâmnicuVâlcea, in the Zăvoi Park from RâmnicuVâlcea… there will be some very, very beautiful places from which we'll present those images, because there are not live broadcastings as I was saying, there are recordings montaged in the form of videos.

I'm waiting for the Radio România Muzical listeners to come and join us and we promise to come back with ideas as beautiful, bold and attractive as possible!